I was frequently asked which is my favoritedestination but I never had a honest answer for that. I used to say that every city has its own beauty and I cant choose a preferred one…and it was actually true. Whenever I visit a new city I felt in love with the place marking it as my favorite…until one day.

I was landing in Sydney after 14 h flight over the ocean, excited to discover my last destination in Australia. After I visited Brisbane, Perth and Melbourne I had a big feeling of disappointment classifying Australia as a boring continent with nothing else to see other than cute Koalas and jumping Kangaroos.

I didn’t have much expectations from Sydney either, many people saying the Opera house (the most famous touristic attraction) is not so pretty as in pictures, being in fact an old and out fashion building. Ignoring others opinion and decided to find the truth by myself I m leaving the hotel wearing a summer top and a short skirt hitting the road which takes to Bondi beach, accompanied by another colleague, curios to discover what seems to be classified as the “gem” of the city.

The weather is just amazing, even if is January, Australia is in plain summer and the buses are suffocated with people wearing shorts and carrying with them the surf equipment. We both regret not bringing the swimming suits with us, watching with admiration and envy in the same time, the courageous surfers playing against the waves and even though neither of us is confident in practicing this sport, a little bit of sun wont do us any bad.

Hundred couples are sitting on the sand, hugging, kissing, playing without anybody judging or even looking and that’s what I love the most about Australia: its freedom.

The love is literally in the air and I am floating on my cotton cloud, enjoying the relaxing atmosphere filled with happines.

I could spend the whole day here if Maya, my colleague would not insist for us to go. I agree with her but not before of taking some “artistic” pictures in my brand new outfit. 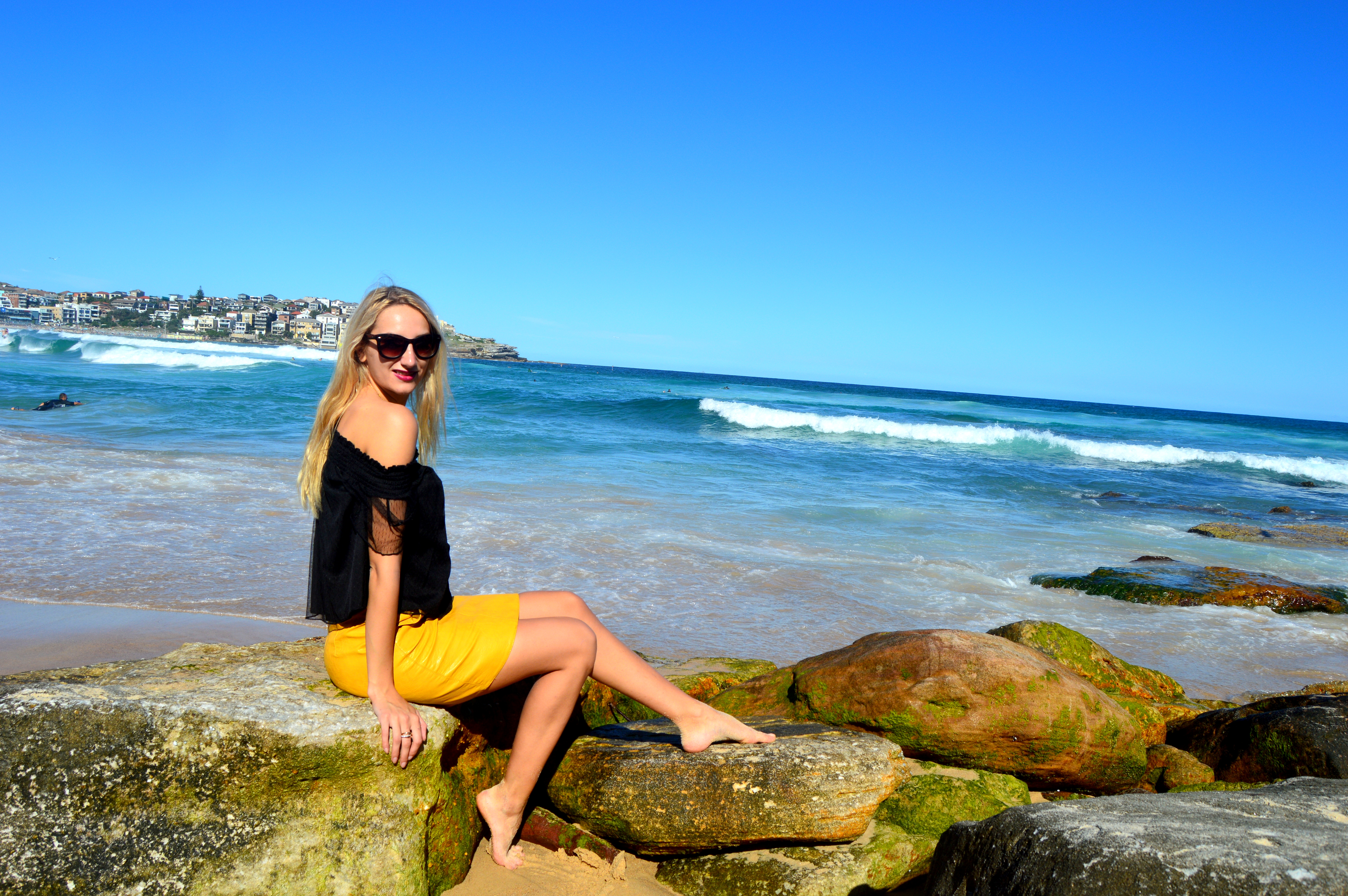 Maya looks very excited about our next stop, the Opera house while I am a little bit skeptical regarding it.

Opera by the bay

The walk from our hotel to the famous landmark is through a beautiful botanical garden full of blossom flowers and exotic birds. Few couples are lying on the grass sharing kisses while the tourists are watching with stupefaction their demonstration of love. Hundred people left the work and now are gathering in the bars and restaurants with the view towards the Operahouse. Everything is so peaceful but so full of life in the same time.

We are stopping for a while, lying down under the shade of a pine three with a direct view over the Opera house and surrounded by gardens with fully blossomed flowers. 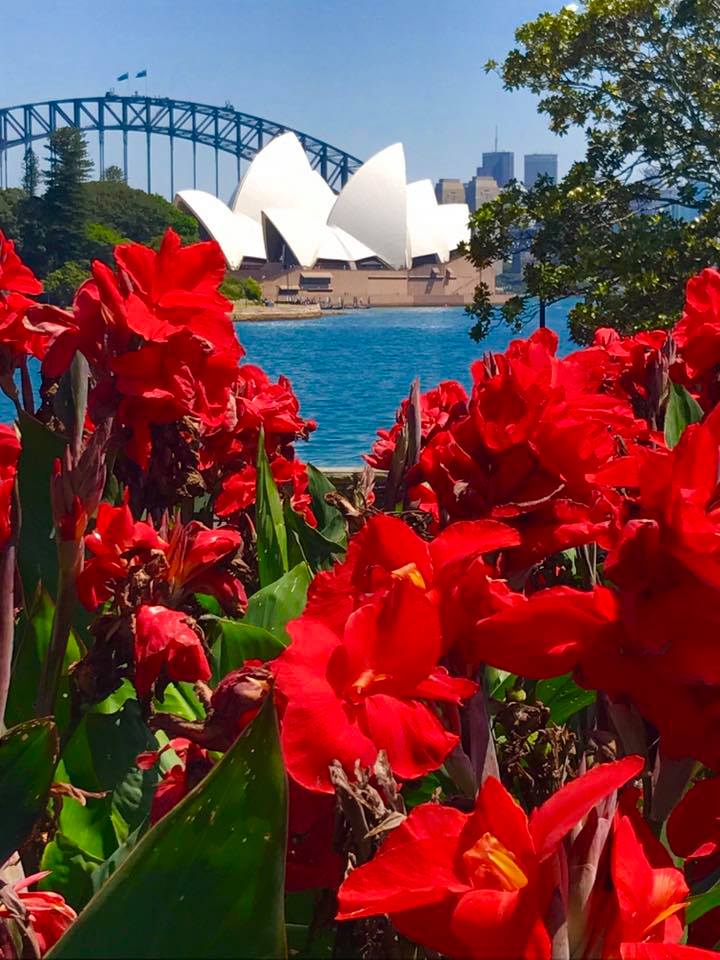 The building designed by the danish architect Jorn Utzon gives the impression of a huge fish brought to the shore by the ocean’s waves, being the symbol of an entire continent, Australia.

But what makes Opera even more attractive are not the artistic performances which take places inside of it but the amazing location on the Bennelong Point, surrounded by the city, the ocean and the modern Sydney’s bridge. 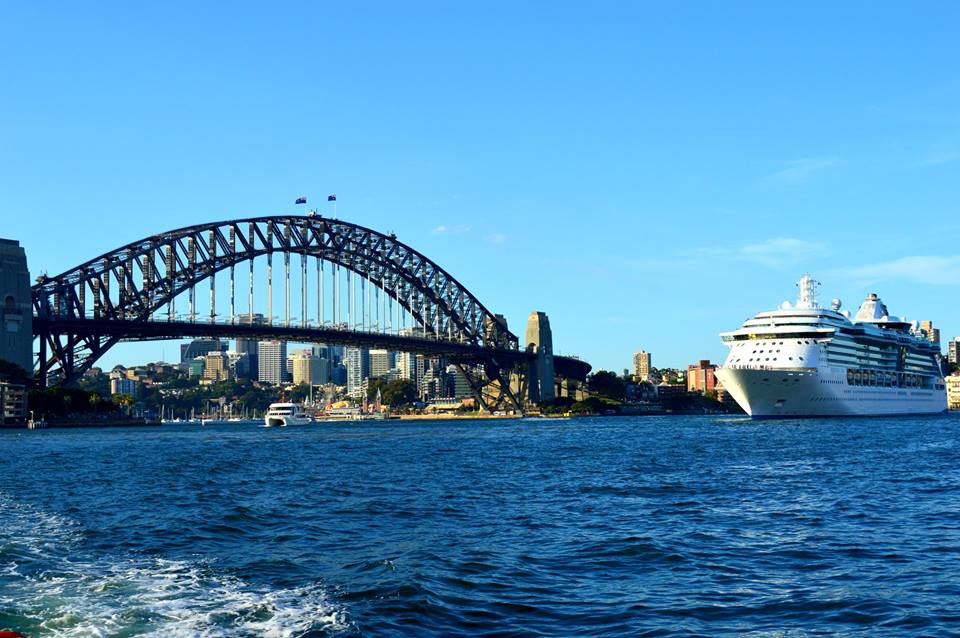 On the way back to the hotel I am admiring the beautiful houses trying to figured out the meaning of the modern sculptures displayed next by the bay. Each property in this area cost few million Australian dollars but I guess it worth the money as long as you have neighbors like Russell Crow and a direct view over your private boat. 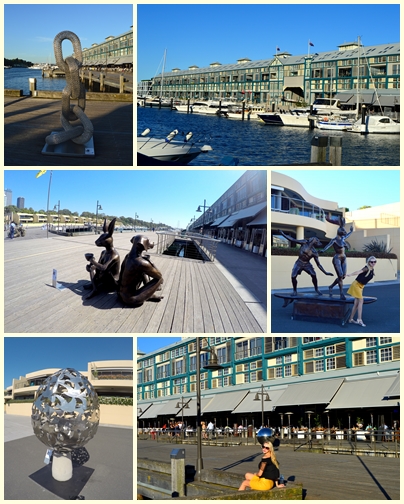 Next morning finds me in the hotel’s terrace sipping from a coffee while waiting for the bus which will take me to a new adventure: Bluemountain. Unfotunately all my colleagues refused to accompany me on this trip due to the high price or long time alocated for it. I respect their choice and I am planing to have lot of fun, exploring a totally unknown location all by myself.

My first stop, is a small zoo with Koalas and Kangaroo (to not forget that we are in Australia) and also lot of other exotic animals and birds. The little Koalas are sleeping as always and nobody is allowed to ruin their long siesta (20hours per day-i have the feeling that Koala is my spirit animal) with the flash of the camera. Luckly, some of them are waking up attracted by the smell of their favorite food, eucalyptus, giving the tourists the chance to take some souvenir pictures, overload with cuteness. But I m even more excited to meet for the first time my cute friends, the penguins, which are really smart and funny creatures. Most of them are sitting together in a corner and seems bored of the curious audience while the stars of the group, two penguins, are giving their best performance in front of the photo cameras. Leaving the Zoo behind…

Approaching the Blue mountains  we are all curious from where it takes the colored name. Apparently the wide eucalyptus species expel oil which in combination with water vapors and dust particles are creating the impression of a blue line on top of the mountains.

Once you are here, its impossible to not notice the “three sisters“, one of the most impressive and massive mountainous structure.

The aboriginal legend says that once the stones were 3 beautiful sisters who felt in love with the wrong man and after a fight between the tribes an elder petrified them to avoid the disgrace of the village. Now, they are guarding over the valley, as evidence of poor love and sacrifice. A ride on the steepest train of the world

The tour guide is coming back to our meeting point with some access bracelets and a fun plan. We are going to have a ride on the steepestpassenger railway in the world. Luckily (or not) I am not familiar with the meaning of the “steepest” word, waiting my turn, excited, looking forward for the magnificent view over the valley and some great pictures. 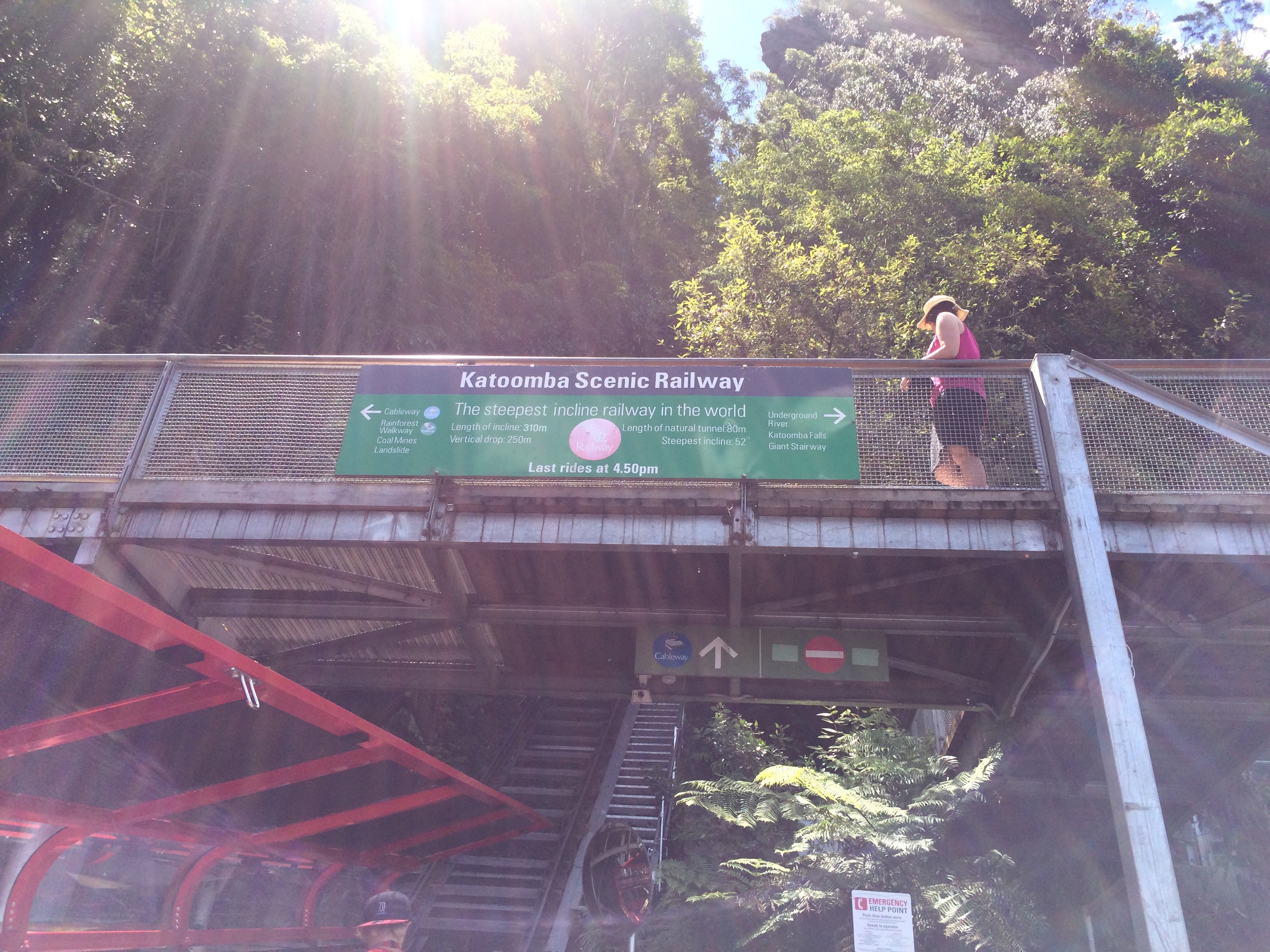 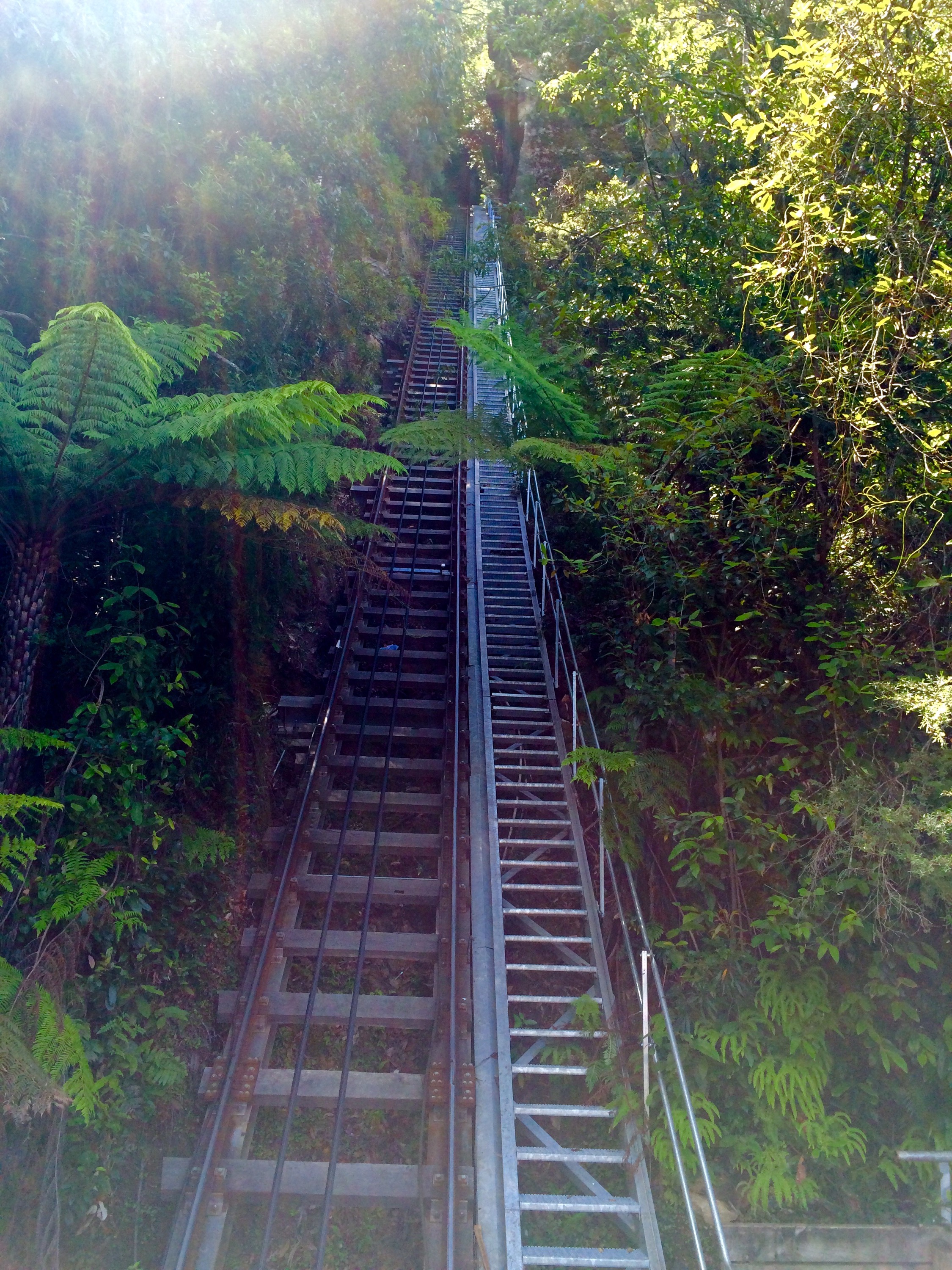 Finally the doors are closing behind me and the railway is starting its descent in a dark tunnel inclined at 52 degrees and… lot of speed. My legs are shaking once I am leaving the train after 10-15 minutes scary ride, I swear to not take it on the way back even if I have to climb the mountain.

Is there any other way back?

Walking through the beautiful valley I meet some of my travel companions, who also don’t look very well after the frightening descent and now we all have a common goal: finding a new route for the way back to the top of the mountains.

We agree about the cable car which seems to be less dangerous than the train but more crowded and with lack of oxygen in the tiny cabin. I can say that I had an enjoyable ride but at least I am back to the top and I m heading straight to the restaurant for a quick snack and a cold water, waiting unpatient the moment of our departure.

The bus driver drop us out in a ferry station and now I will have to find my way back to the hotel. I am extremely tired and all I want it’s a little bit of sleep before my ultra long flight back to UAE.