India through my eyes

Few things to do in Bangalore

First thing that you should bare in mind when planning a trip to India is…that you might want to reconsider your choice. However if you are one of the few people fascinated by poor living conditions, have a strong stomach ready to digest exotic spicies or maybe you are just an unlucky cabin crew forced to spend a layover in India, these are few things that you must do or not while in Bangalore. Thats totally up to you.

First thing that comes into my mind when I think about India? Street noise, horns and millions small weird devices on three wheels, called Tuc-Tucs. The motorized rickshaws represent the main way of transportation cheap and efficient, but not very safe in my opinion, alarming traffic reports unfortunately sustaining my beliefs.

However you can not leave India before trying the inedite experience of a tuc-tuc drive on the crowded streets of Bangalore. Take care of your belonging though, many incidents involving naive tourists being reported daily. The price of the ride…depends on your bargain skills. Fascinated about Bollywood movies, indian colorful fashion or shinning jeweleries? I bet you aren’t. However if you want a new, different shooping experience there are few areas in Bangalore where you can find an wide variety of traditional clothes (basically an area where you can choose between buying a sari or a choli which is more or less the same thing). I visted one of these famous street myself, leaving obviously empty-handed and…in rush.

If you want to follow into my footsteps I must admit that I have no clue about the street name as I dont have the slightest desire to ever return.

The major religion in Bangalore is the hinduism and therefor lot of colorful temples are rising along the streets, from where the Hindu gods can throw a careful eye to their worshippers sins. Nowadays Brahma, Shiva and other holy figures are working in a tight partnership with the local police trying to prevent a series of misbehaviors: ignoring the traffic signs, relieving the physiological needs in public spaces, slipping hands in the wrong pocket etc.

The cows are scared in India and therefor you may encounter them walking unabated on the streets of Bangalore. However the holy bovines are not that safe everywhere in India, in two states (Kerala and West Bengal) the cow slaughter being perfectly legal.

Intrigued by the weird importance shown to these animals I decided to visit one of cow’s relatives worship place: The Bull temple. 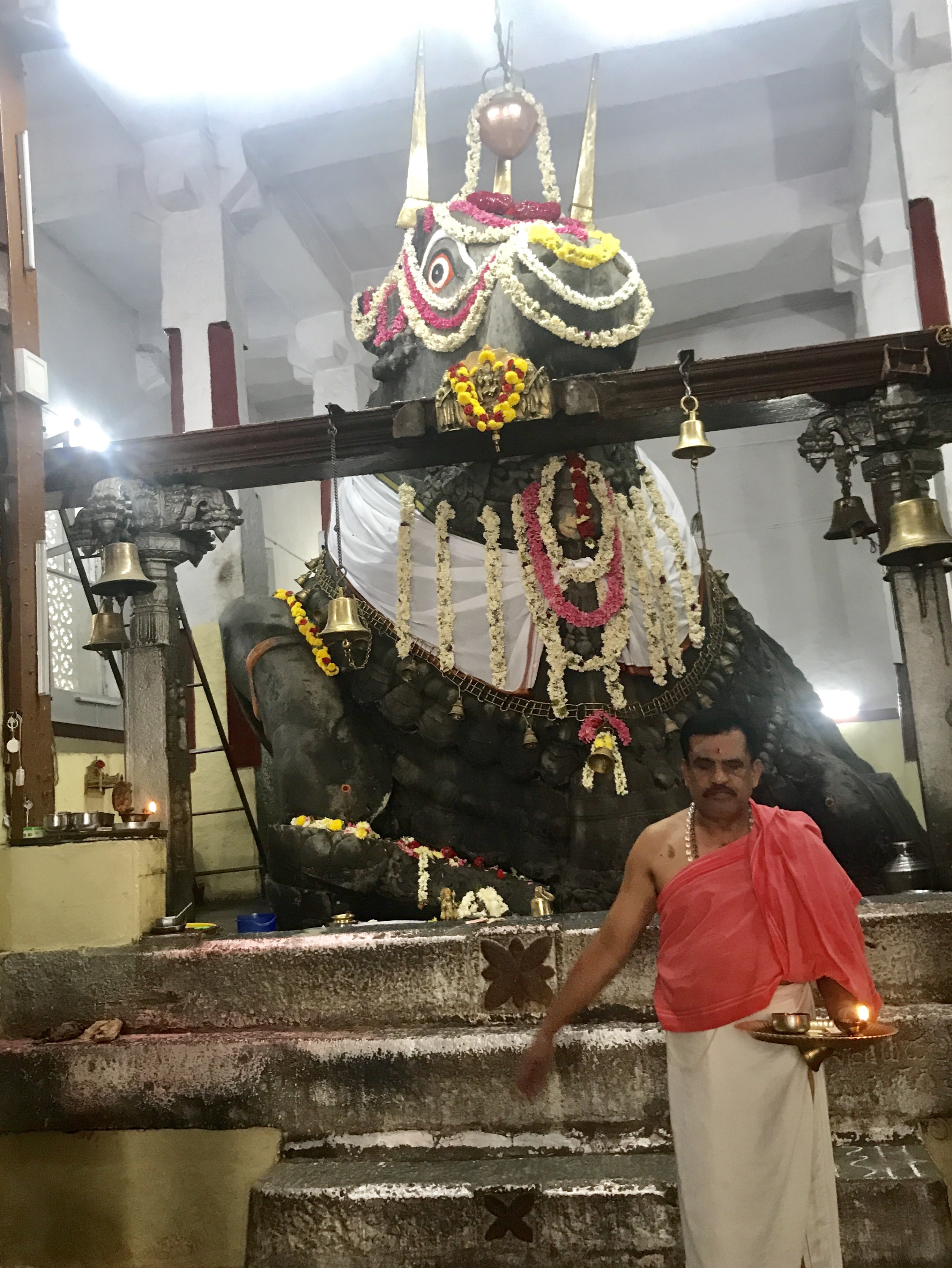 Stepping inside the holy place) after I removed my shoes), I am immediately greeted by one of the hindu priests who seems to perform a sacred ritual which involvs a tray with candles, red powder and…money. He is vaguely explaining me the history of the temple and then he request a “contribution” for the Gods blessings. I place on the holy tray 100 rupies, ready to run towards the exits but he follows me insisting to mark a red dot on my forehead. Very common in Hindi culture, the bindi dot is believed to open the third eye which offers a certain level of wisdom and concentration. To me it felt uncomfortable and out of ordinary reasons that determined me to clean it up as soon as I was away of the Gods view.

Trying to retrive my shoes I am informed that I must pay another “tax”. I place in the collection box the only 2 coins (20 rupies each) that I am carrying at this time but it seems to infuried the old lady who made a job out of guarding the tourists belongings, pulling my hand aggressively and shouting “money, money”. I turn my back taking my coins back…and my shoes. Namaste!

The only palace that I visted in Bangalore is the Tipu sultan summer palace, an impressive oasis of tranquility right in the middle of the city.

I knew nothing of the place and one of the locals observing my lost gaze starts asking me some history related informations, followed by his triumphant preach on how the palace opens its gates for ignorant tourists every day. As I am about to find out the proeminent landmark of Bangalore was finalized in 1791 under the command of Tipu sultan, depicting islamic style arcades and used as summer residence for his highness. 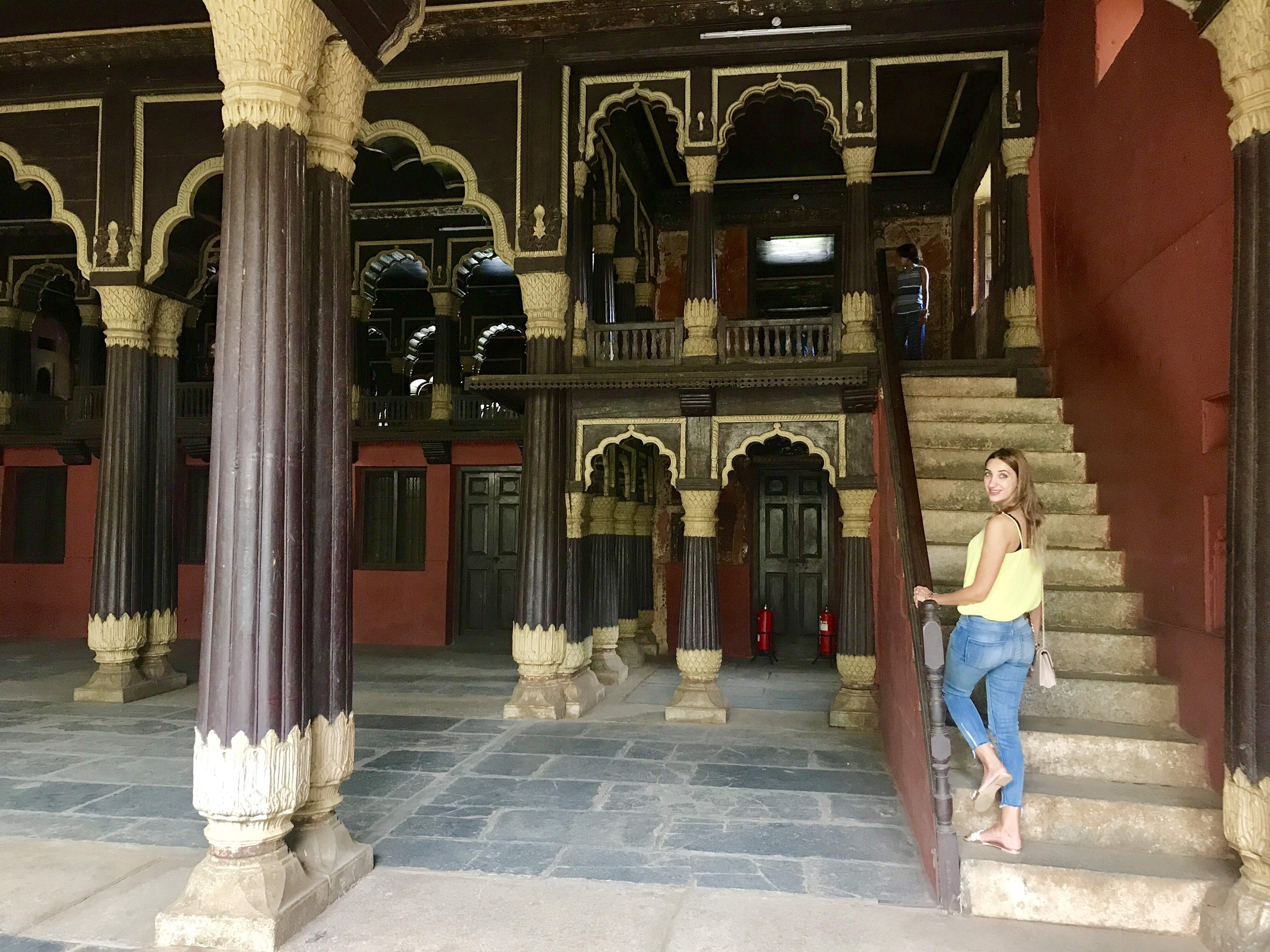 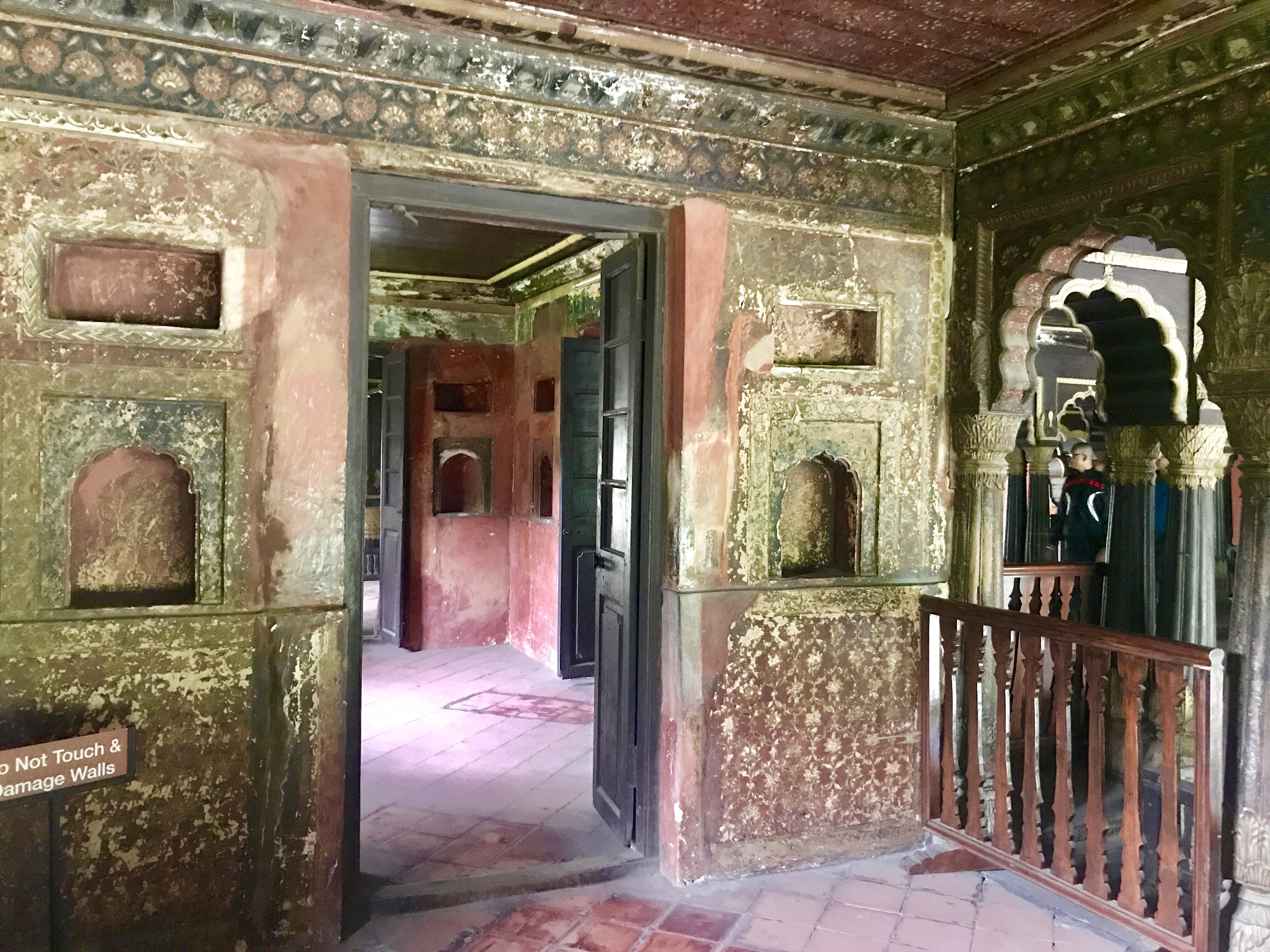 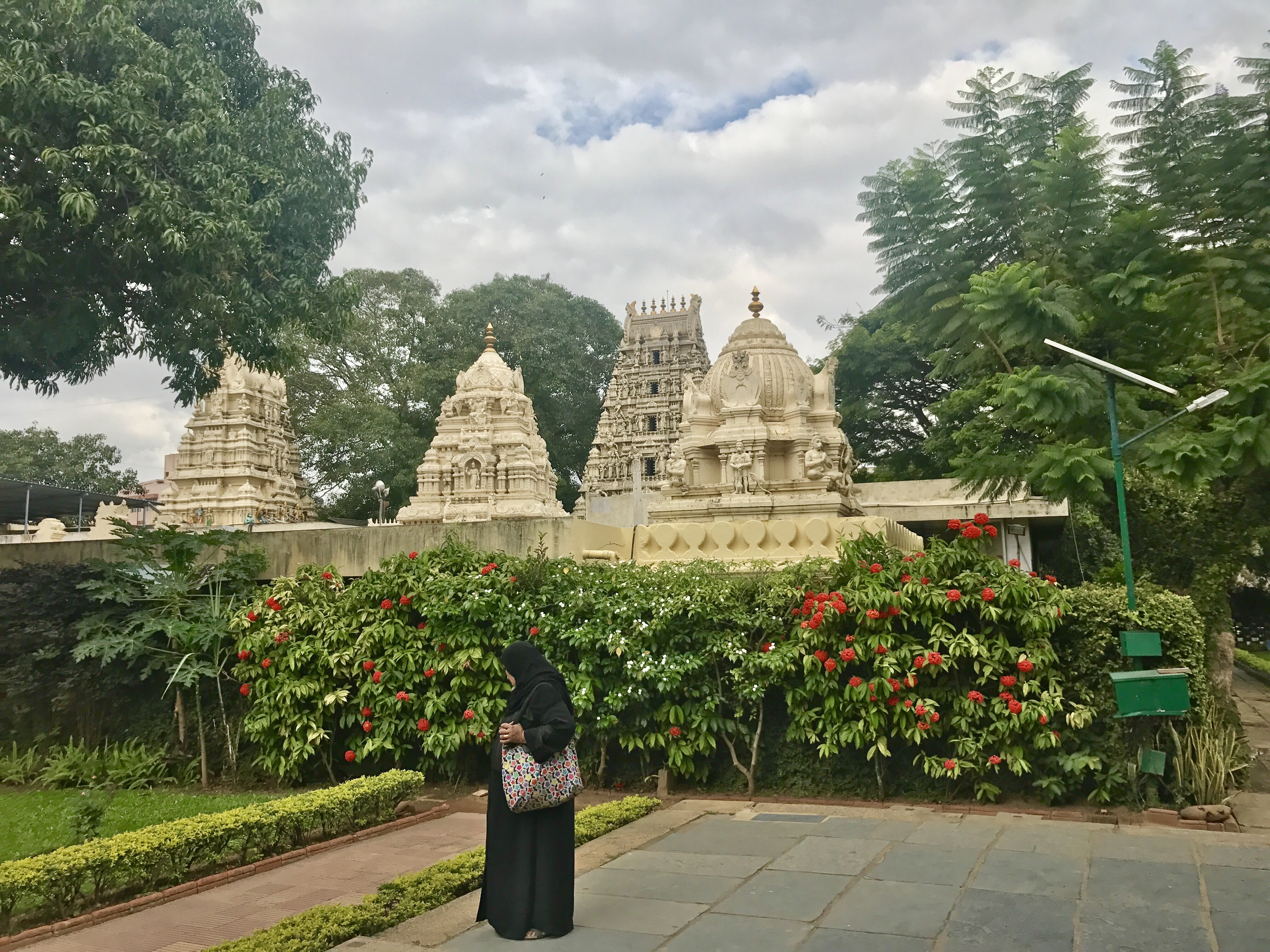 The palace was named “Envy of Heavens” and even if hundred years passed by, the place indeed preserved its incontestable beauty with green gardens, exotic birds and…hindu neighbors.

The access/exit to the garden is made through two natural tunnels composed by arched roots and green leaves. 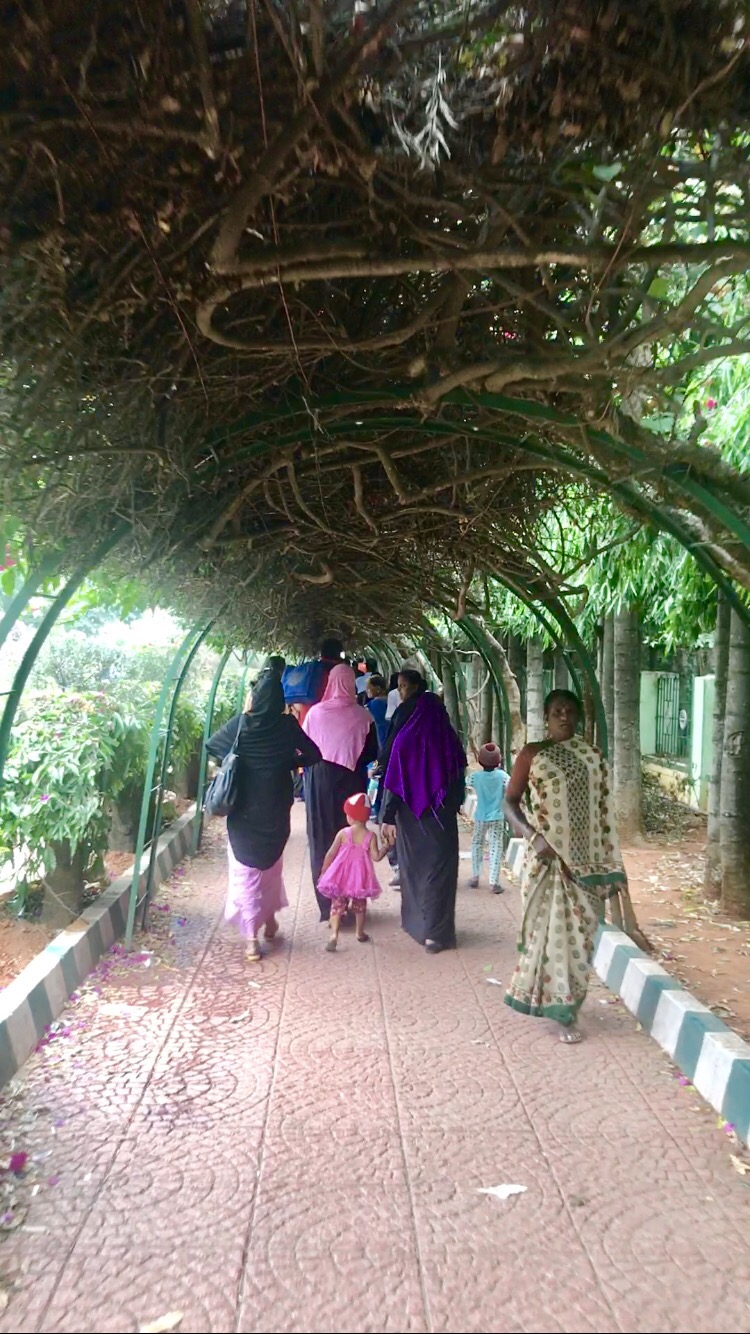 Lal bagh botanical garden translated as “The red garden” was finished by the same Tipu sultan and it host India’s largest collection of tropical plants. Luckly enough I am about to assist to one of the shows dedicated to flowers only twice per year (26 January and 15 August) which also coincide with the India independence day. 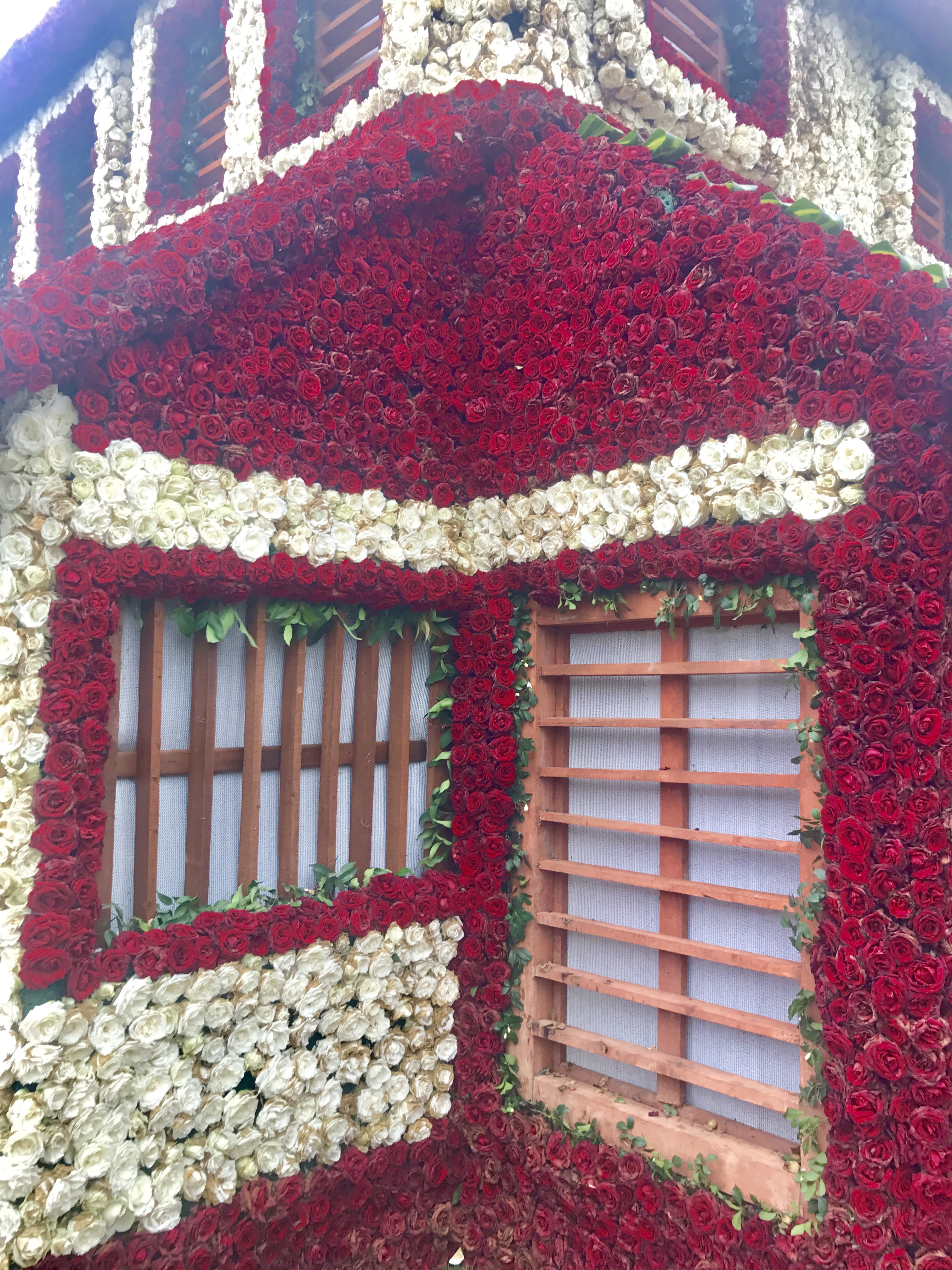 Outside of the garden, thousands indians wearing colorful traditional clothes are celebrating the liberation from the U.K governance, clicking a picture in front of the heart arches, most certain inspired by the Miracle gardens of Dubai.

Moving forward, a huge rock protruding high above the ground captures my attention and I climb right to the top, admiring the sunset settling behind the park.

Apparently the Lalbagh rock is declared a National geological monument, dated 2-3 billion years back and often visited by tourists all over the world. Today, many families are gathering together united by the same feeling: freedom for the country.

Vidhana soudha is an administrative building, which combines the ancient and modern architectural design in one of the most imposing construction ever known in India. It can easly compete with the Washington Capitol, the House of commons in UK or The parliament building in my beloved Romania. The entrance is decorated with 4 headed lions (the national symbol of India) while 4 domes placed in each corner stands as prove at its greatness. Pretty cool!

Opposite Vidhana Soudha is standing another famous but more “stylish” landmark, the High court of Karnatka, probably inaccessible for the curious eye of the tourist.

What I love the most about Bangalore are the numerous parks where you can take a well deserved break in the lap of the nature. Cubbon park (named after the longest serving commissioner at the time) is located right in the heart of the city, often visited by the tourists and locals interested in picnic, casual walks or the 6000 different plant species populating the park, a piece of heaven in the middle of the chaos. 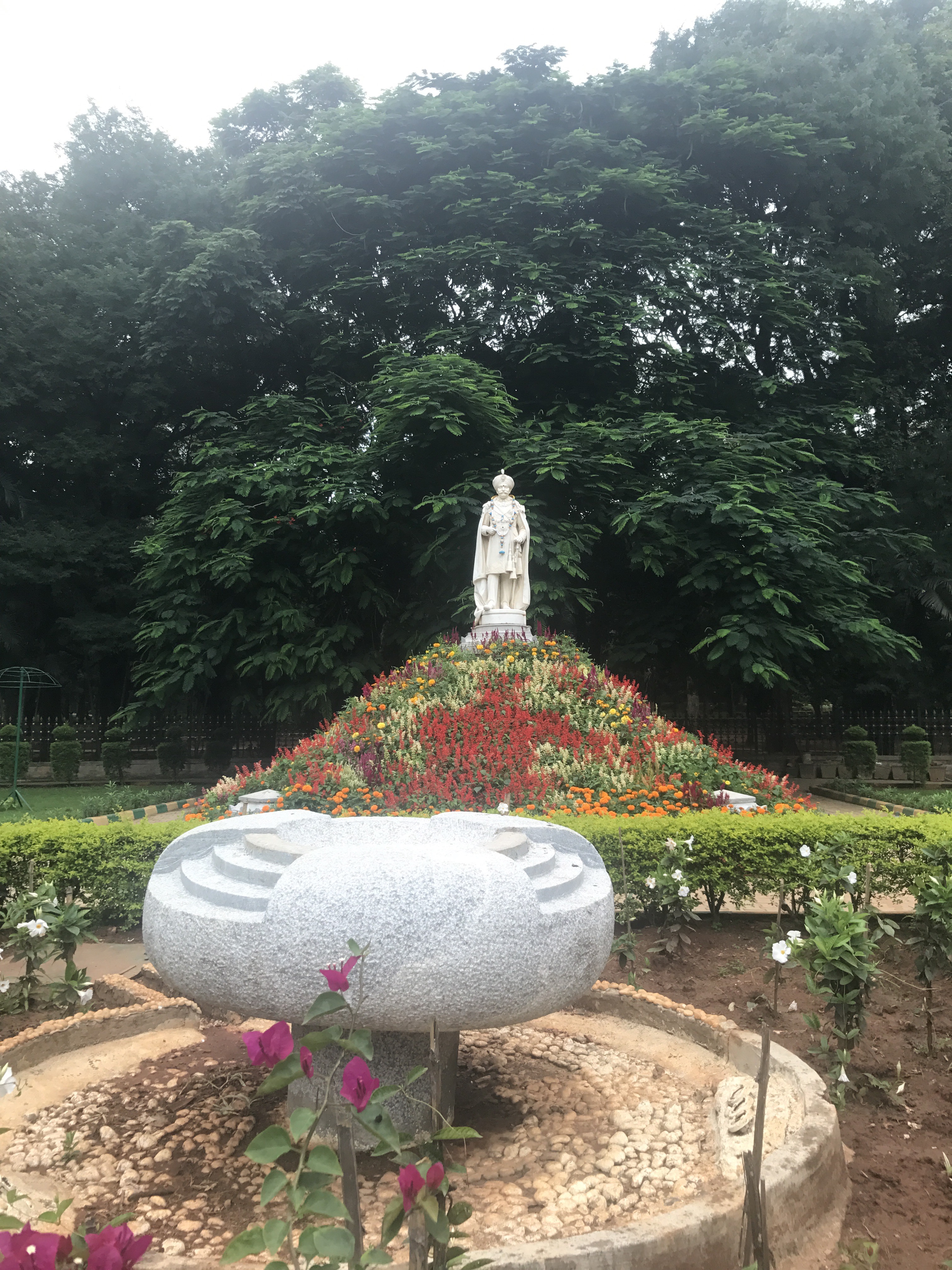 At the edge of the park, the State central library opens its doors and pages for everyone interested in its stories. The beautiful red construction attracted my eye like an magnet and I would have spent the rest of the day discovering its misteries if a gang of strays dogs would not have blocked the entrance. Few busses perfectly aligned in front of the building are ready to start their engines in order to spread happiness and knowledge around the city. Great job Bangalore! 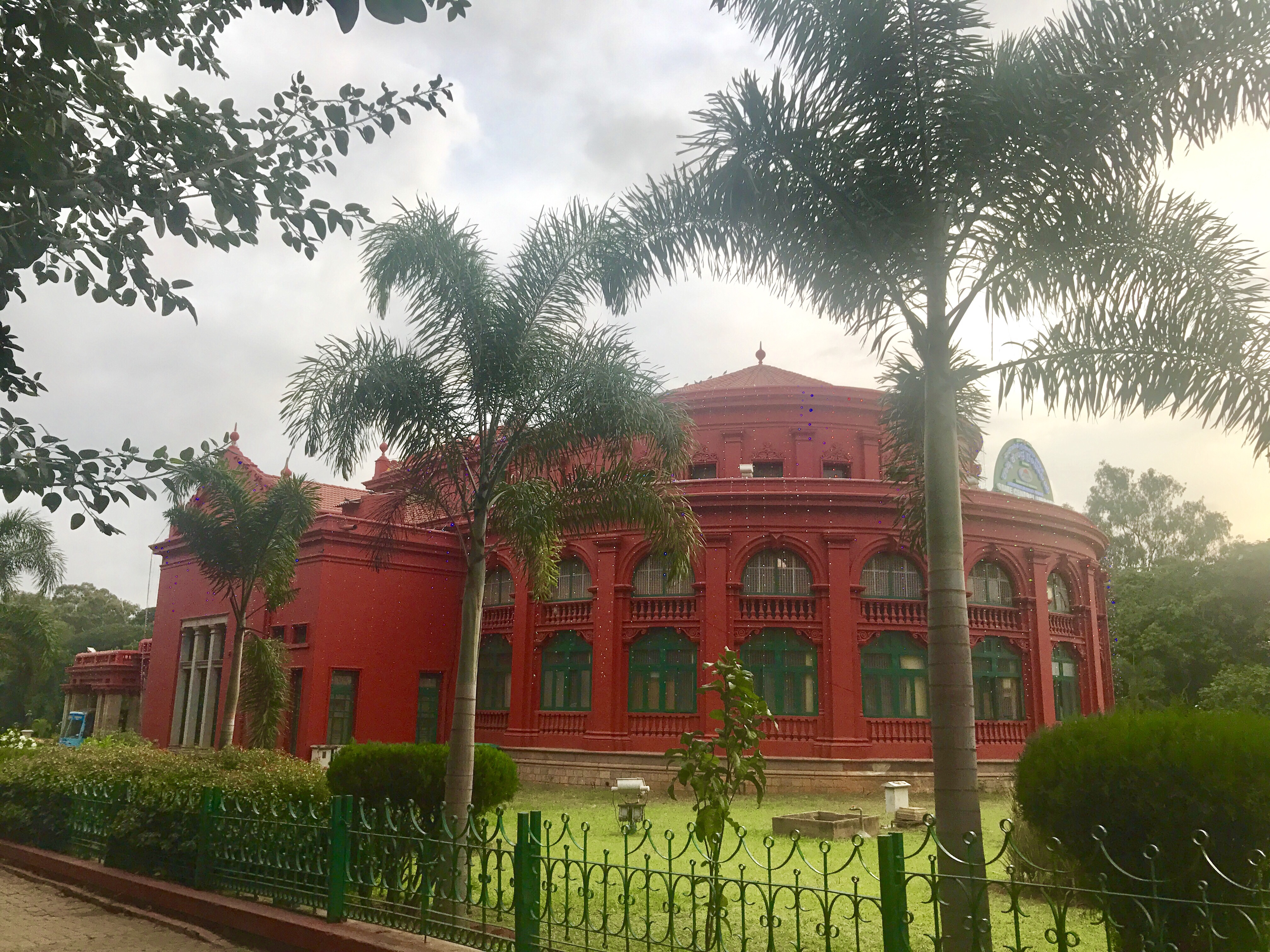