“Moscow is the city where if Marilyn Monroe should walk down the street with nothing in but shoes, people would stare at her feet first.” John Gunther

I am walking down the Red square admiring the beautiful mixture of Sovietic arhitecture and new era design and even if is not my first time in Moscow I am still stunned by the greatness which surrounds me at every step. 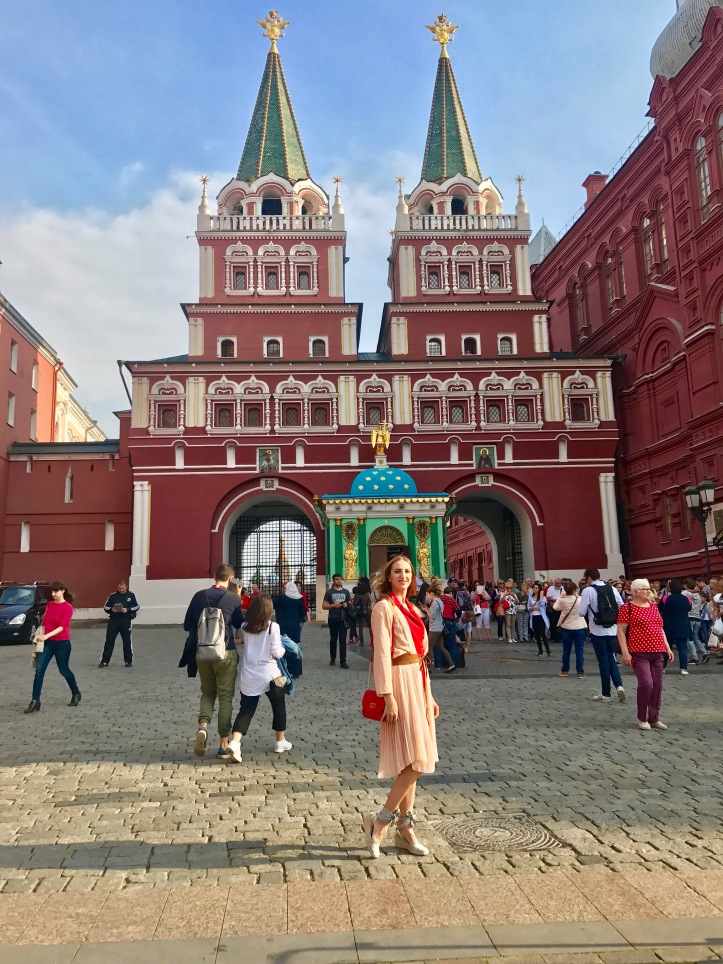 Surprisingly, even if its the end of september the weather is still warm and I decide to leave behind the winter clothes that I brought with me “preventive”, replacing it with something more “fashionable”, trying to keep up the rythm with the elegant russian ladies wandering the streets of the Capital city.

Most of my colleagues are in Moscow for the first time and I tear up with regret my long list of museums, decided to be their guide outside of the Kremlin walls.

We start our short visit with the famous, colorful landmark situated right in the heart of the city: the cathedral of Vasily the blessed commonly known as Saint Basil’s cathedral. The unique construction was finished in 1561 and incorporates 10 side churches, the last one covering the grave of the venerated Saint Vasily.

While some “critics” would say the cathedral reseamble a bonfire pointing the infinite sky I did find a more creative description: a giant ice cream with rainbow flavor. If in my previous visits I tried to behave the best way possible, right now the child inside me is ready to taste the havenly cup even if it means crushing some religious boundaries.

While the moscovits are throwing me a surprised look, (“how am I capable of such blasphemy?”) I set up a new trend and just couple of minutes later few other rebels following my sinful behavior start “licking” the domes of the holy church.

Its time to stop our silly photoshoot trying not to disturb the eternal sleep of Vladimir Lenin who is resting peacefully just few steps away from us. 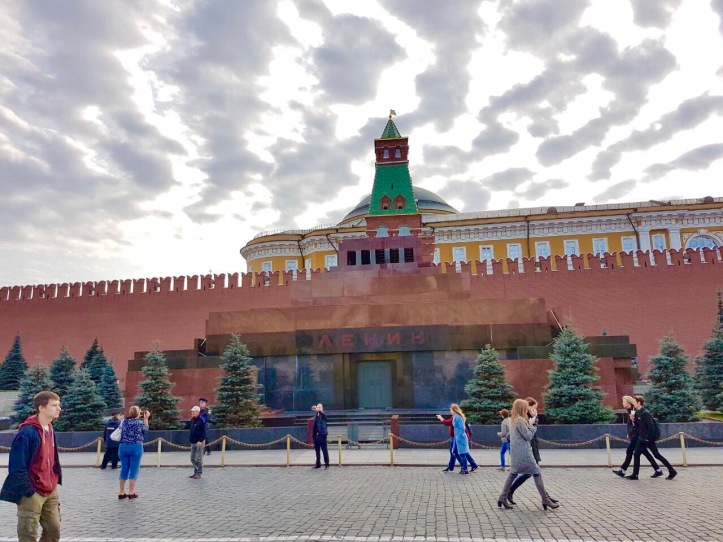 The body of the imposing sovietic leader had been on public display shortly after his death (1924),  russian authorities making great effort to keep his appearance intact over the time. The mausolem is visted daily by a huge crowed who is subject of high security measures at the entrance and is required to pay great respect to the dead leader once they are inside: hats, hands in pocket, talking and photography are strictly forbiden.

Moscow always made me feel like home giving me that feeling of similarity, of belonging and everything seems just right: the grey comunist buildings outside of the Red square, the countless churches whispering their prayers towards the sky, the candles lited inside of the cathedral with their believers kneeled in front of the holy icons, the people struggling to convert strong communist concepts into modern beliefs, the “babuska” (old lady) who won’t refrain from judging with loud voice two teenagers kissing on the street, locals still struggling with the english, reluctant to the foreign tourists visiting their country.

We step inside of one of the most proeminant church in the Red square, the Kazan cathedral, some of us for a brief prayer while others curious to discover what is hidden under the roof of an ortodox worship place. 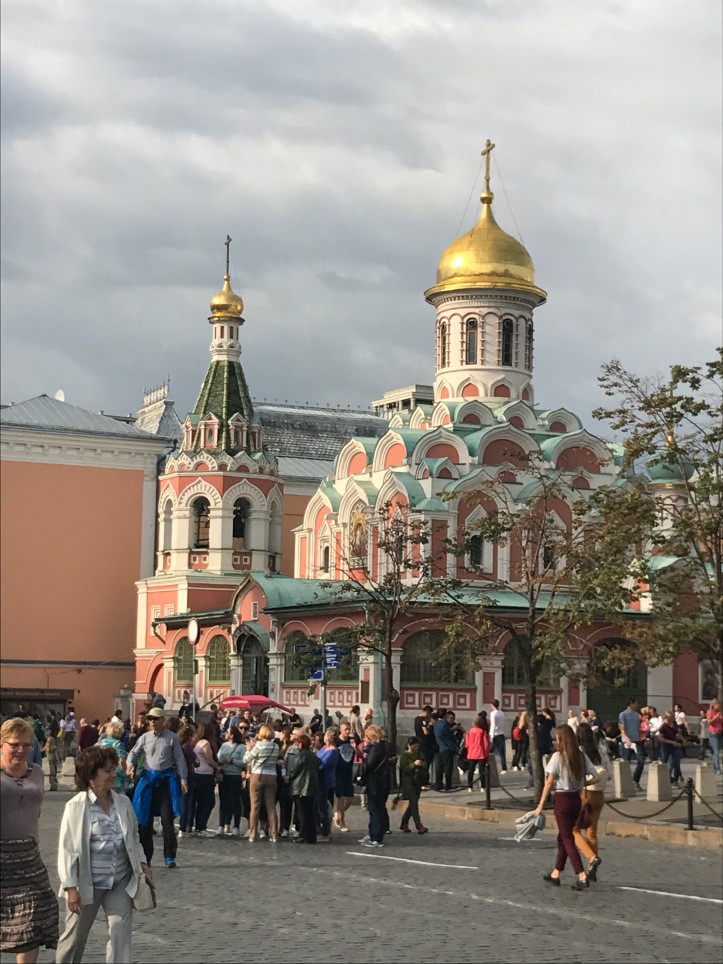 Soon after, we are about to be kicked out by an angry christian who feels insulted by a colleague attempt of taking a picture inside of the holy church. Russians pay great respect to their religion like any other believers in the world, fact which should be known by everybody, especially when a big sign with “photography prohibited” is hanging on the outside door.

Outside of Kremlin walls

We leave behind the majestic Red square,passing  through the Ressurection gate where a bronze plaque is marking the kilometer zero of russian highway system. 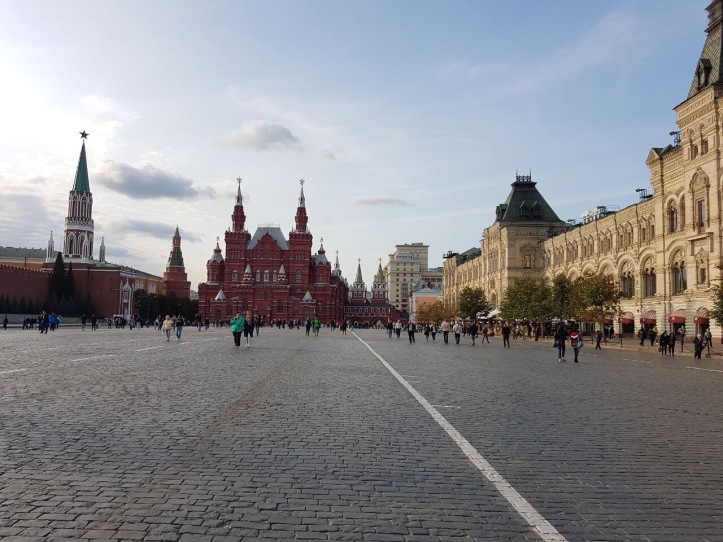 Here, hundred tourists and locals on both sides are gathering around the plaque, waiting impatient their turn to make a wish. The legend says that throwing a coin over the shoulder will bring you great fortune but only if the coin will land in the bronze circle. I tried my luck…

You can never force your faith but you can definitely add a “shot” of hapiness to your life…and meanwhile in Russia the good mood is not measured in glasses but in barells of…vodka: “Nostrovia”

We continue our walk outside of the Kremlin wall towards the Alexander’s gardens where million blossomed flowers are spreading their fragrance in the air but the only smell that we are interested in right now its the one of baked bread coming from the restaurants situated alongside the bridge. 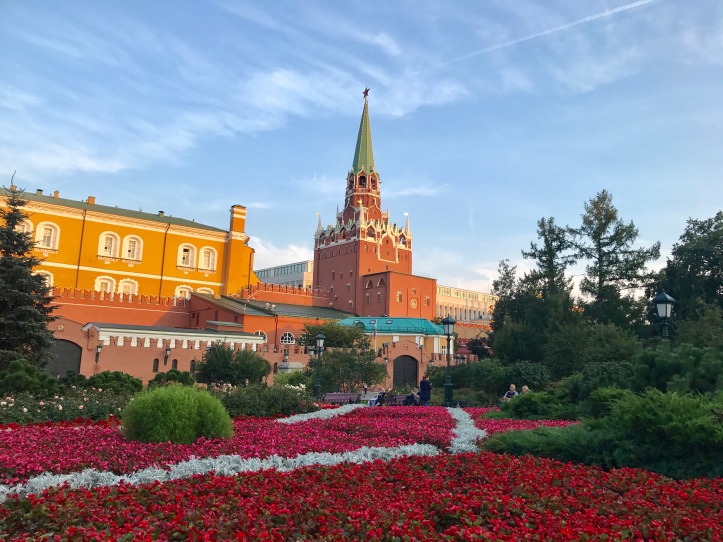 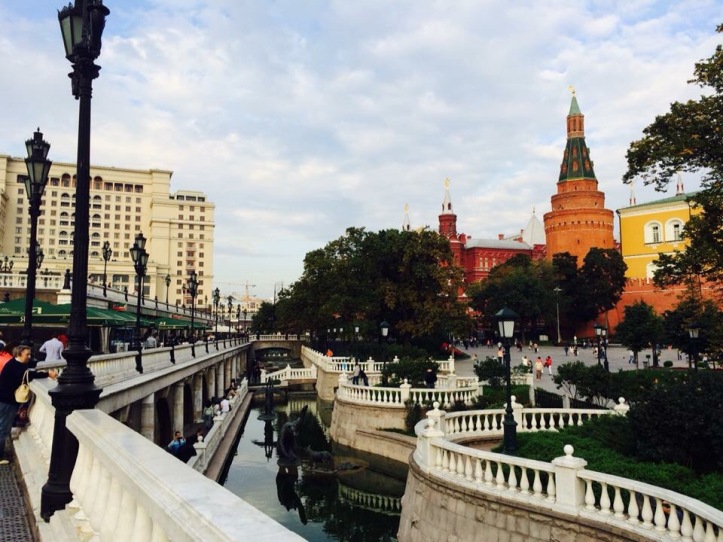 The sun is about to settle down and we decide to end up the evening with a traditional dinner in a pleasant location. Once inside, we step back into the past where everything around reminds of sweet years of childhood: vintage furniture, black and white tv, creepy dolls and the unforgettable flavors of mulled wine and grandmas food. 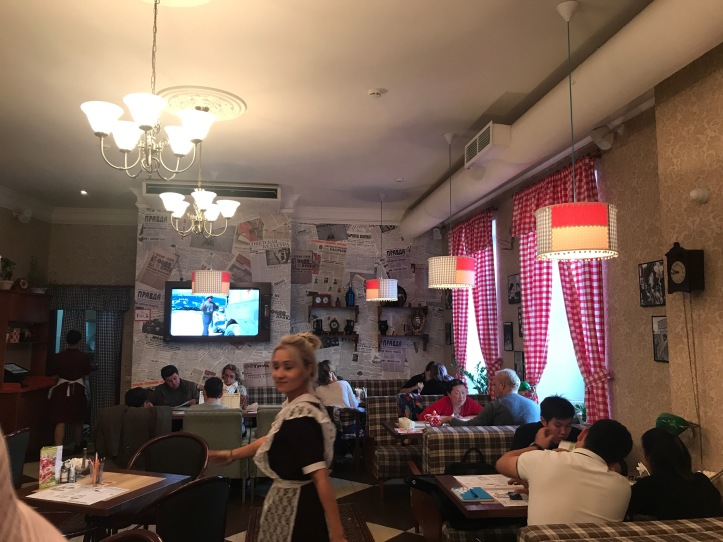 Surprisingly russian food is not very similar with my country’s food (Romania) even though our past is so close connected. I open the pages of the “slavic magazine” which serves as menu card and I choose a soup and a main course based on the pictures displayed.

Russian food is definitely not on my preference list but I totally enjoy the atmosphere and the two glasses of aromatic mulled wine responsible with my red nose and the big smile on my face. 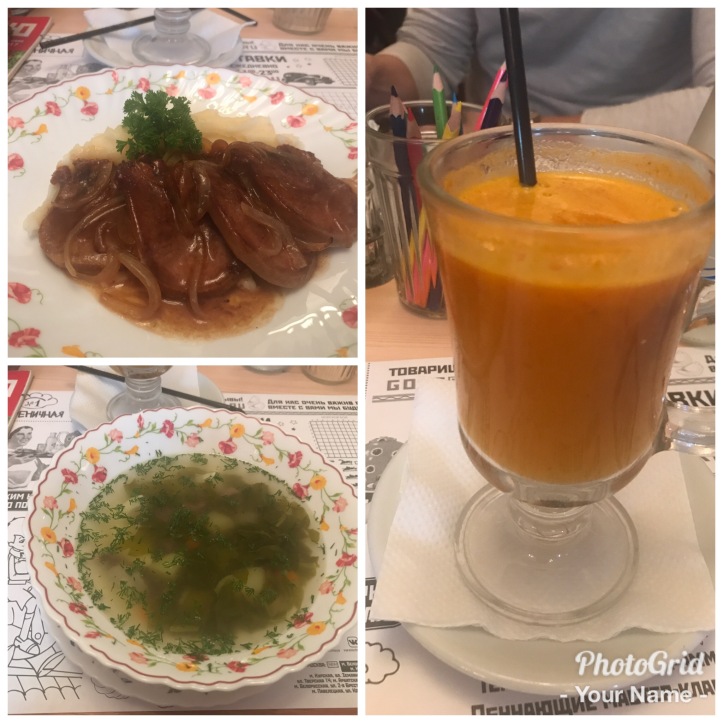 Outside everything changed completely, the majestic empress is now ready to shine in its ceremonial clothing.

Moscow by night is full of magic, its fascinating and enigmatic. Beside that, now its the time when the locals start gathering inside of the fashionable shopping malls situated not only across the square but also bellow it (underground).

Facing the Red square is GUM department, a building with a fascinating history like everything else in Russia, built in 1893 and unique for that time due to its glass ceiling, functioning in present as a shopping mall. 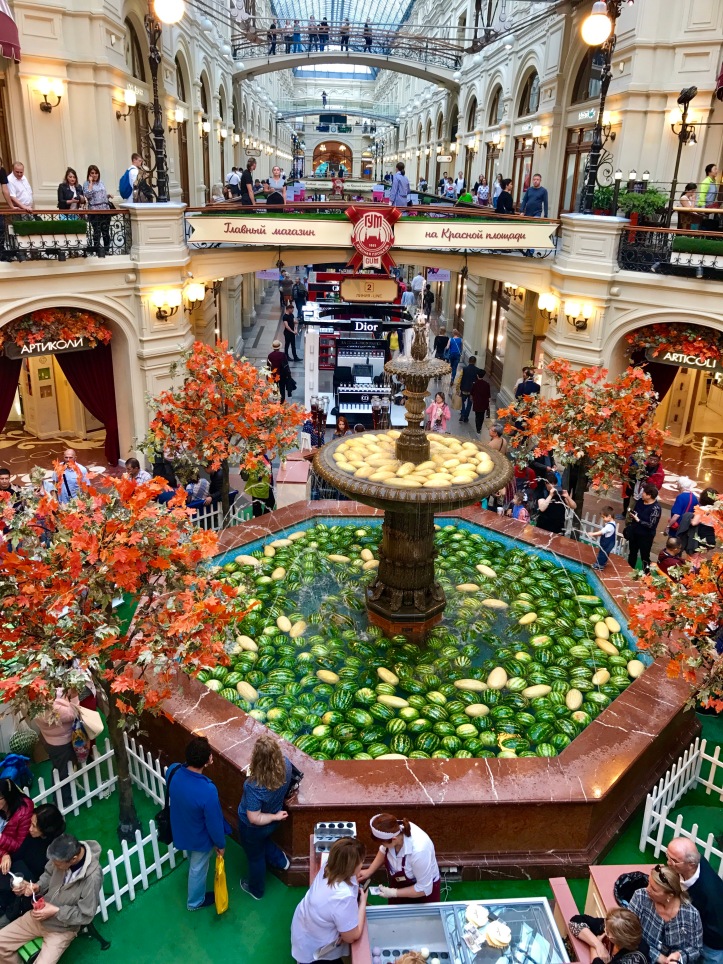 Its time to end our visit and while my colleagues try to avoid the terrific traffic of Moscow walking towards the hotel, I prefer to wait for the shuttle bus, paying a visit to the famous Bolshoi theatre on my way. 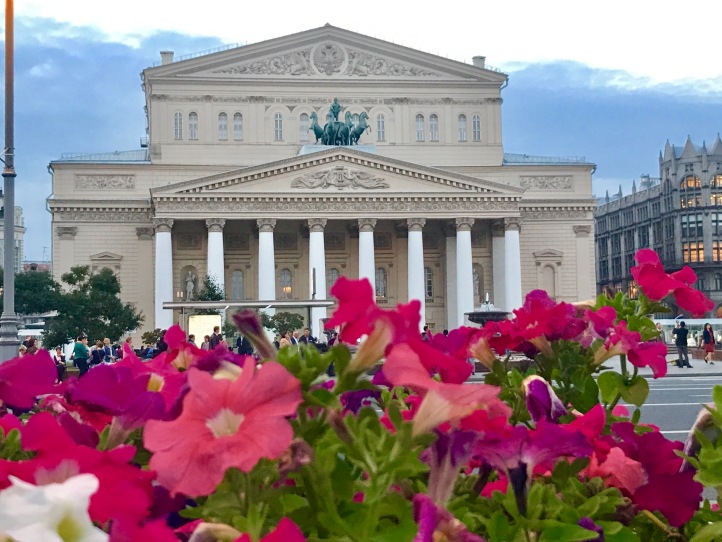 P.S: the photos were taken during 3 different visits in Moscow, some of them in 2017 while others in 2014 but all the places mentioned above can be visit in just few hours, being located extremly close to each other.