The ancient mysteries behind Nazca lines

The mysterious lines stretched across the Atacama desert in southern Peru had been analyzed by the archaeologists and scientists from all around the Planet for the past 80 years but nobody could explain with certainty its origin or significance.

The enigmatic geoglyphs have been spotted for the first time in 1939 by a pilot flying over Nazca and since that time many people have tried unsuccessfully to discover its meaning: ancient highways, astronomical calendars or perhaps runways for alien spacecraft?

I am about to find out even though I have to pay a high price…400$ plus an experience which will bring me close to death.

After almost 8 hours drive from the capital Lima through the driest desert on Earth I finally reach the small town of Nazca, together with my friend Georgiana, ready to discover one of the biggest mystery left behind by the Incas. 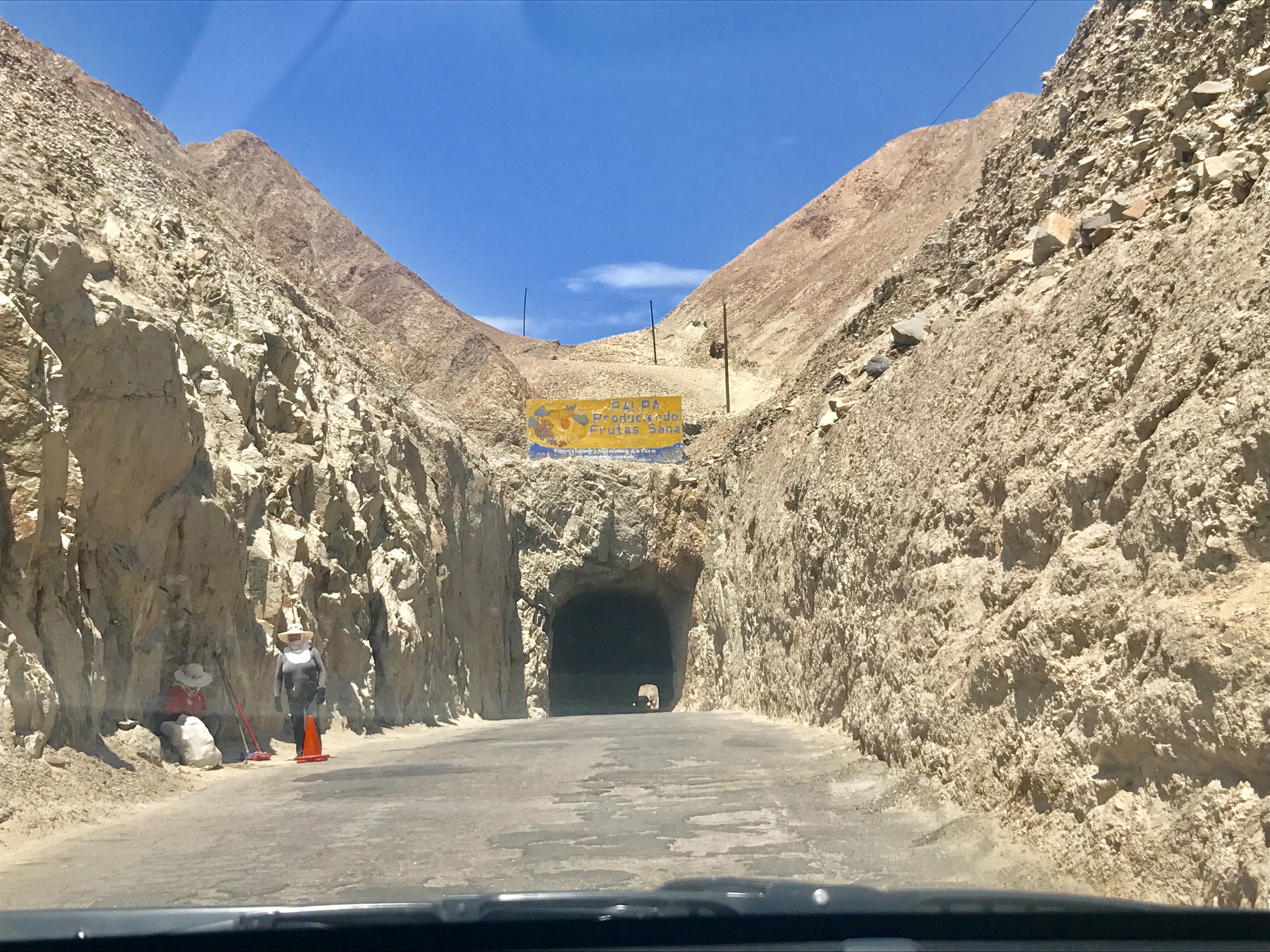 I am about to regret my decision straight away, as soon as I noticed the poor condition of the airport: no air conditioning, tired pilots stretching their legs on uncomfortable seats between long flying hours, old aircrafts with doubtful maintenance and low security system.

Like real cabin crew we prepared for the flight in advanced following some useful advices found on internet: no food or alcohol as the flight might be quite bumpy, coca tea for nausea, an air sickness bag and lot of courage. What nobody ever told us is that we will need a passport or any other form of identification (which makes lot of sense now being the fact that we are about to board a plane). Luckily, a copy of the passport sent by the hotel’s receptionist on WhatsApp together with a warm smile was enough to open the check in gates for us but don’t rely on the good will of the authorities when you plan your trip to Nazca.

The pilots approached us and the others passengers (a family with 2 kids) instructing the group to follow them outside on the tarmac, appearing friendly and professional while we walked towards the aircraft. The weather is nice with clear sky and high visibility. What can go wrong? 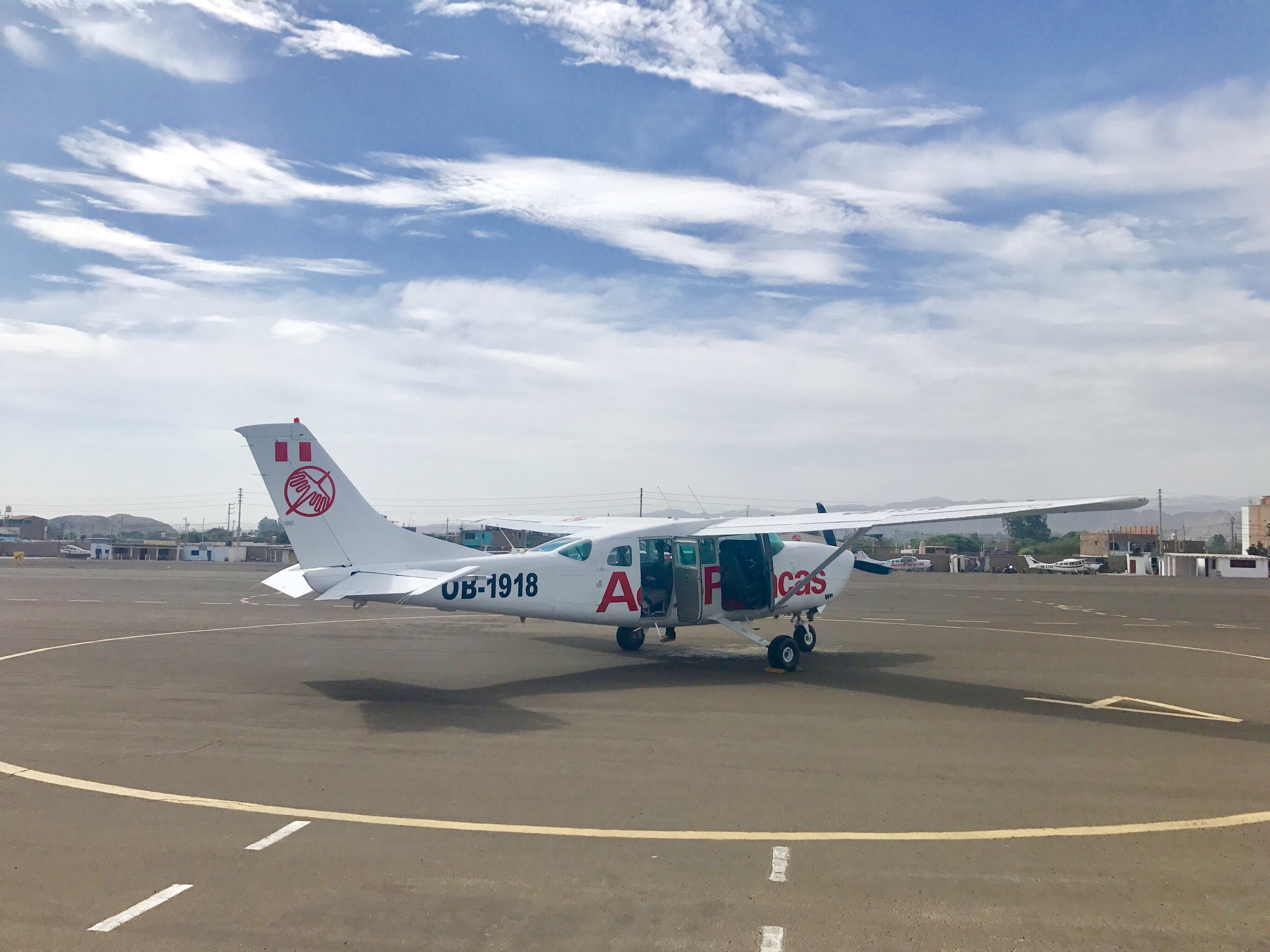 We board the small plane being assigned the seats right behind the pilots when I realize that I am about to do the biggest mistake of my life. The aircraft is visibly old and poorly maintained, the Captain having some troubles with his door which needed a strong kick from the outside in order to be close for departure.

Before take off we receive a map with the Nazca figures (12 drawings in total) and a pair of headsets while the pilot explain us how the aircraft will be tilt on both sides (right and left) for all the passengers to have a complete view over the lines. The tips are also advisable and soon I will be willing to give away the 2000$ that I am carrying in my bag just to have my feet safely back on ground.

I am totally aware that flying a 6 seats plane will not offer the same comfort like a commercial jet but I never anticipated what was about to happen. Once in the air strong desert currents flip the aircraft back and forward and for few seconds the pilots seem to lose the total control of the plane, rapidly decreasing in altitude for what seemed to me like a few hundred feet.

I am terrified thinking that I might lose my life in this far away place on Earth in the most silly way possible while the passengers behind us are screaming, vomiting or just telling their prayers silently. 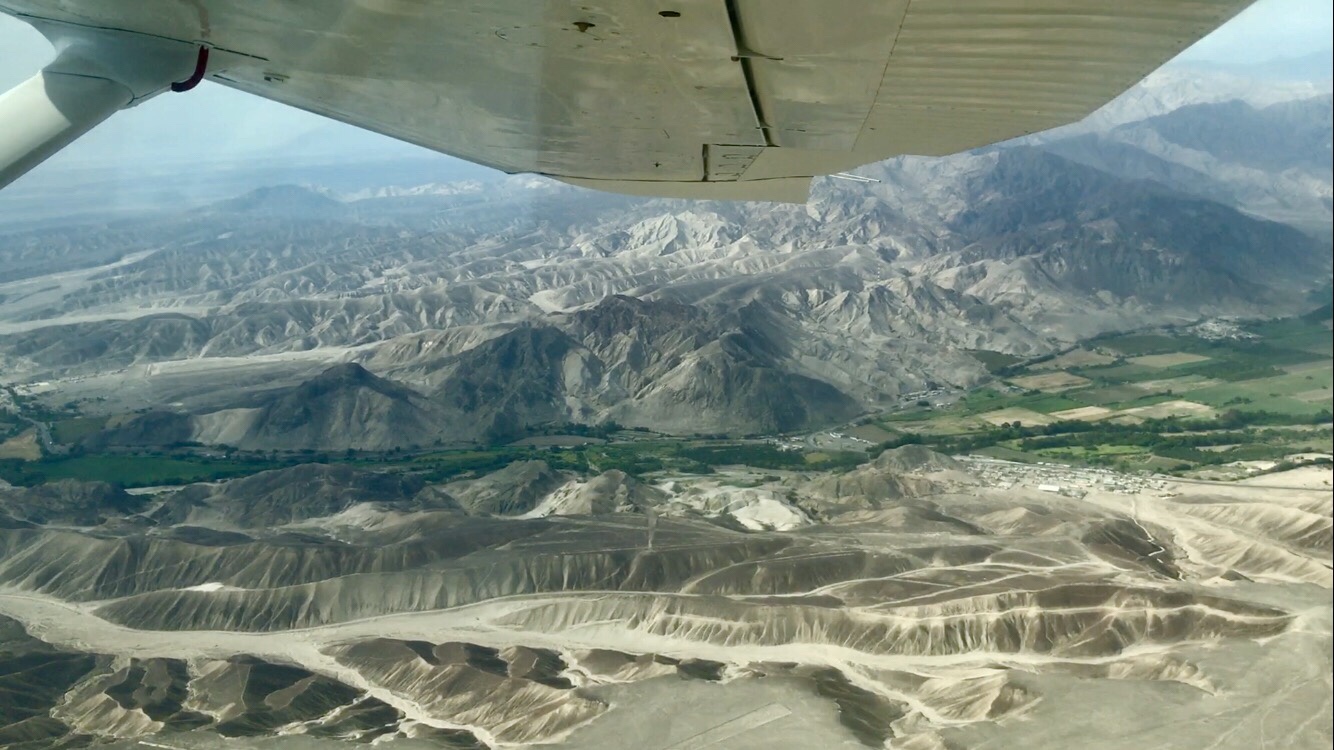 The pilots continue the flight without any explanation about the terrifying incident, rolling the plane right and left, pointing towards the figures which now more than ever don’t make any sense to any of us while we are counting impatiently the last moments of our 20 minutes horror journey.

The most visible and interesting lines that we were able to see are by far: 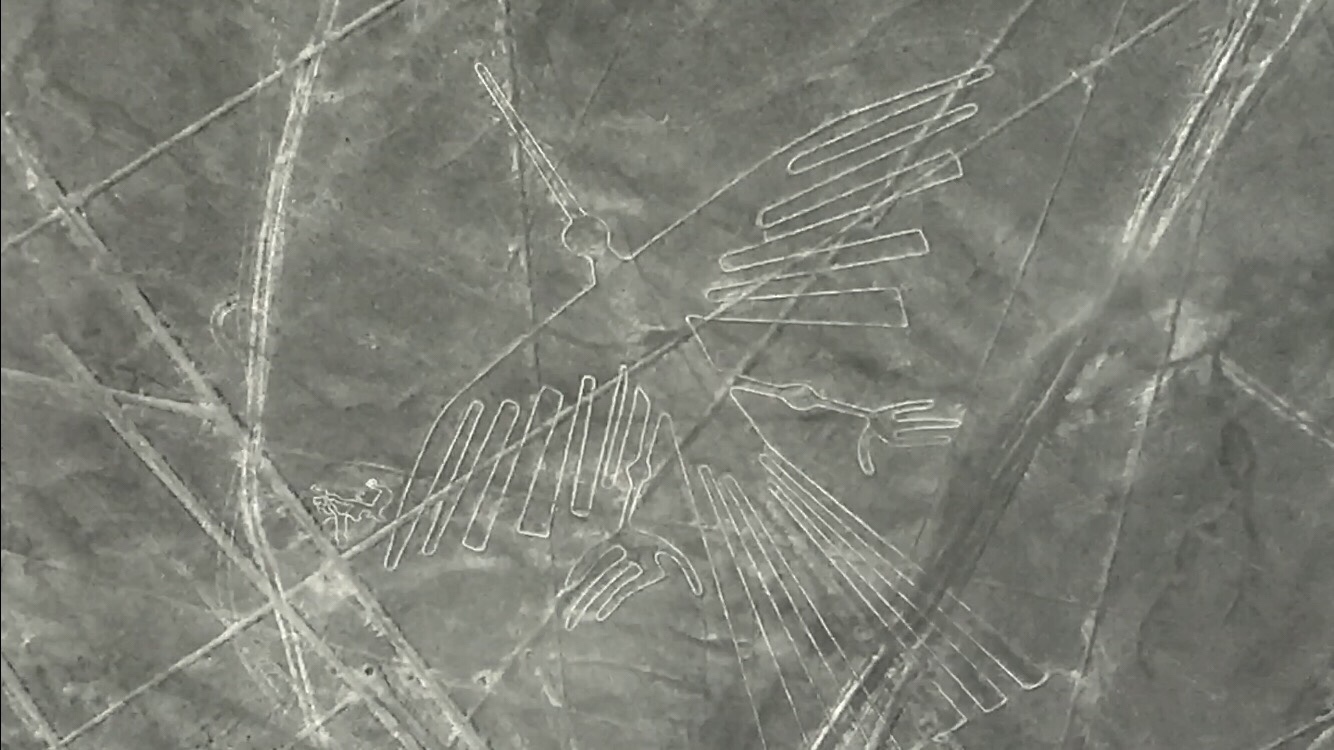 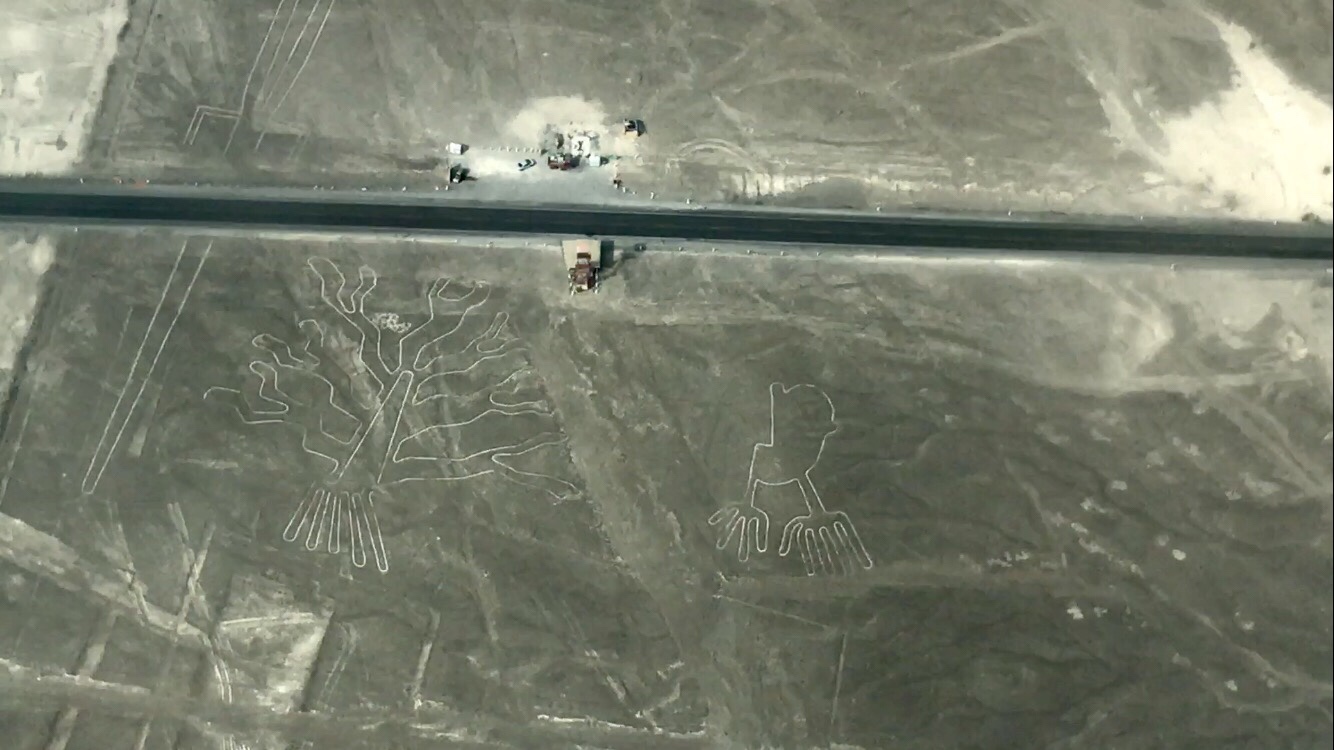 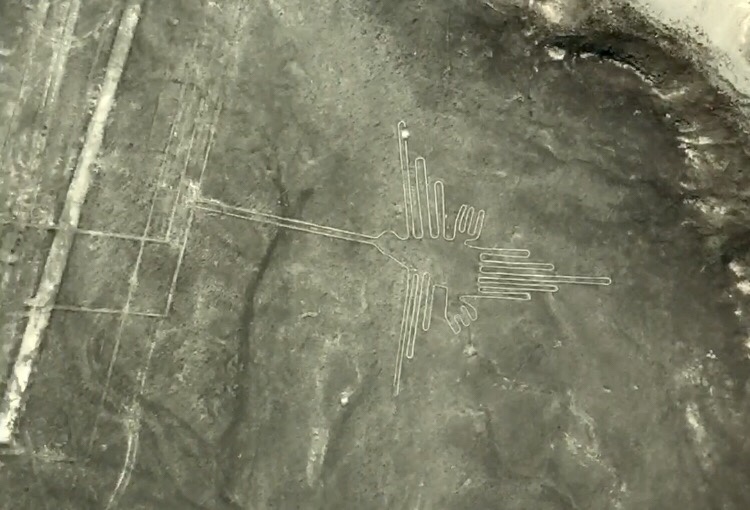 From simple lines and geometrical figures to more distinct shapes such as monkey, spider or birds, the 800 Nazca lines survived untouched for the past 2000 years. Alien intelligence or simply man power? The evidence seems to be quite clear on that, the modern researchers creating similar drawings by scratching the sand of Nazca desert with basic tools but will they stand the test of time?

The “witch” of the desert

Used for religious purposes such as ceremonies performed to obtain water and fertility of the crops, to invoke rain, predict astronomical events or just to praise a superior force, the geoglyphs remained a mystery until today even though numerous scientists have dedicated their entire life studying the enigma behind the lines. The best example in this sense is the german mathematician Maria Reiche who was known as the “lady of the lines” making the incas drawings famous worldwide after 40 years research. In her book entitled “The mystery of the desert” ms. Reiche expressed her astonishment about the complex knowledge of mathematics and geometry demonstrated by the ancient Nazca civilization.

She was so deeply passionate about the lines that she built herself a house in the middle of the desert trying to preserve and protect the geoglyphs from any attempt to destroy it. Not once she was observed cleaning the lines with a broom to remove the dust and make it more accessible to the view, being called the “witch of Nazca desert” and subject of rumors and jokes throughout the time.

Driving over the lines

Since the lines are almost impossible to be detected from ground level, a truck driver decided in the beginning of the year (January 2018) to plow into the ancient site damaging three of the geoglyphs with his act. Genuine mistake or simple curiosity? The Peruvian authorities lacked evidences and decided to free the truck driver in exchange of a 1500$ fine.

While flying offers the tourists the best view over the enigmatic lines, the safety concerns raised in the past few years are truly alarming with an increase number of crashes resulting in serious injuries and even fatalities. Upon deep investigations it has been discovered that the planes are often flying on half filled tanks, using inferior fuel or gliding with the engines off in a desperate attempt of saving cost. Most of the airlines were left without a license but it didn’t stop them from operating the right next day under a brand new logo.

That’s why is very important to perform a thoroughly research before you choose your airline and not accept blindly the first overpriced and unsafe offer which comes into your hand, same as we did. To be honest, if I would have the chance to take a decision again I would never pass through this traumatic experience and I would not advise anyone to try it as the lines viewed from the sky are really not impressive.

When the pilot announced the end of the journey we all breath relaxed, without knowing yet that we are about to make a last turn before touching down the runway: the water wells.

With an unique spiral design the wells were built as a sophisticated hydraulic system serving not only for agriculture, but also for irrigation and domestic purposes in one of the most arid places in the world. Basically the ancient Nazca civilization was able to retrieve water from the underground aquifers in order to irrigate and cultivate the surrounding desert.

We finally reached the runway unharmed in what was the worst landing in my life (after 4 years of flying) and my whole body is still shacking long after I disembark the aircraft, while the other passengers are either pale, holding bags full of vomit or just running towards the airport trying to end up this nightmare as soon as possible.

Do not understand me wrong…the pilots were truly amazing and skilled but this kind of adventure should be classified as extreme sport and the travel agencies should advise the tourists in advance about the risks that might be taken into consideration when deciding to fly over Nazca. The kids and people with cardiac history should not be allowed on the flight.

Even if flying is part of my daily life, after this experience I did develop a trauma materialized through continues nightmares and a big fear of flying.

Candelabra of the Andes

A safer and way more beautiful alternative of Nazca lines is represented by the Chandelier. The interesting design belonging to the Paracas culture (200BC) is 595 feet tall and can be seen from the safety and comfort of a boat. More details about its symbolism will be shared in a new travel story.