Wearing colorful hanboks (traditional Korean clothing) hundred people of all ages are gathering in the inner court of Gyeongbokgung palace in Seoul. They all seem ready to attend a royal ceremony in the old palace built more than 600 years ago during the Joseon dynasty but in fact its just a regular day of spring inside of the palace walls.

The blond hair is back…so it is the fame

The beautiful costumes worn by the tourists and locals on both sides can be rent from the shops outside of the palace (quite cheap) and are essential if you want to live the real experience of what a day in the royal court might have looked like. Since the beginning of the times, beauty has been able to open many doors and this being said, by wearing a hanbok you will be exempt from paying the 3$ entrance fee for the palace.

I decided not to groom myself in ceremonial clothes as I am traveling alone and selfie poses are not really my virtue, without knowing that I am about to become the main attraction of the locals with or without a sophisticated dress. 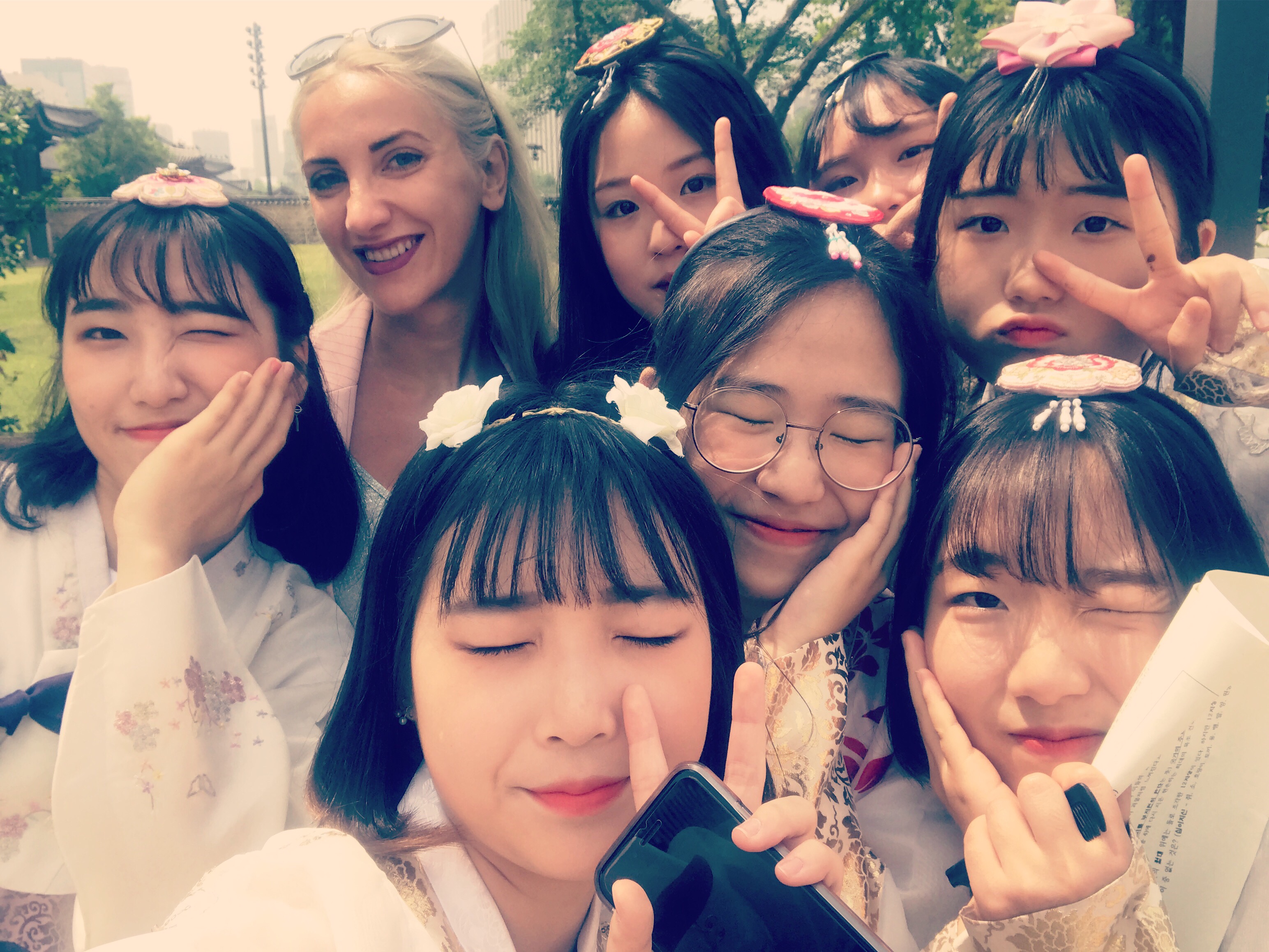 I have to admit that the blond hair and blue eyes have always brought me fame whenever I was traveling to asian countries but I don’t mind that…celebrity life seems to suits me well after all. Asians have a real fascinations for the europeans travelers and they don’t miss any opportunity to capture the special moment in a picture.

Are the asian ladies insecure?

During my trips to Asia I observed a high level of insecurity displayed by most of the ladies, unaware of their beauty. Its quite hard for them to accept a genuine compliment about their appearance, blushing to the ears or giggling like scholars whenever I would tell them “You are also pretty”.

Girls, you are beautiful and you don’t need anyone to tell you that. Think this way: you have better genes which make you look forever young, beautiful facial features (rarely need a nose job) and you don’t often face issues with the weight.

The history of the palace

Back to the story, the palace have been completely destroyed in the past, first by the Japanese invadors and then by fire but every time was meticulously restored, keeping intact the initial design and decorations.

Beside the majestic architecture of the buildings, the inner court host a beautiful “Secret garden”, the main attraction for the tourists nowdays. Its late spring and probably the perfect time to wander the alleys which long ago represented the favorite place for the women of Joseon dynasty. Stolen kisses, broken wows and thousands tears, this garden knows it all.

Changing of the guards

Since ancient times the soldiers guarding the main gate of the palace perform a special parade involving ceremonial uniforms and weapons which catch the eyes of the passerby, especially of the foreigners. The ceremony it’s hold every day (except Thursday) from 11-1 pm and it shouldn’t be missed (advised someone who actually left before it started, without knowing) as it is a great opportunity to experience a rare traditional scene in Korea.

Outside of the palace, skyscrapers and modern cars reminds me that Seoul its in the present a huge metropolis strongly attached to its roots, maintaining its history and religious believes intact over the time.