I hear a knock on my hotel room door and my blood freeze instantly. I am scared to open it, even to get close to it, instead I am hiding under the blanket like a small child scared of monsters. But this time the monsters are real and they are creating panic and fear everywhere in the world, more often than ever.

I am in Brussels, one of my favorite destination, the heart of Europe. Leaving home excited I was dreaming to wander the streets of the old center, to enjoy a nice dinner with Mussels and Wafles for dessert and do some grocery shopping. But here I m hiding in my room, adviced to not go out of the hotel and avoid sitting next by the windows. I m trying to sleep but even this seems to be difficult. There is  nobody on the street… schools, metro stations and even shops are closed and the only passengers in the busses are the drivers. The police sirens never stop and they are searching continuesly for something or maybe for someone. The whole city is shut down. Being in the high terrorist alert transformed the amazing Brussels in a ghost town where the only humans on the street are armed and ready to fight.

Two years back I was flying to Brussels, operating my first flight. I was happy, excited to discover a new place but the most important thing…I was free. I had the freedom of going out in the crowd with no fear, freedom to trust people around me. Now, while I am rushing from the bus to the hotel, I am looking scared behind me with every noise that I hear. Everything look suspicios: the black van parked in front of the hotel, a motorcyle which is passing next by, even the few brave people who ignored the authorities adviced and ventured on the dark streets.

Back in time, I am thinking about the tree that I photographed on my first visit in Brussels and I am wondering if it is still there and if it has any idea of what’s happening around.

Probably not… in the end of the day it is just a tree.

Walking on my imaginary street I see myself in the old city center, in front of the Grand palace. One of my heels got stuck on the small cobled stones which are covering the ground while I was admiring the beautiful facades and the multitude of statues.

The amount of the tourists is incredible, same as the different languages that they are speaking, fact that proves they are traveling from different corners of the world just to visit this wonderful city. Brussels is animated, full of life and it’s hard to find an empty seat on the restaurants area. The smell of the sea food is irresistible and I won’t go back home before trying the famous fries and the Belgium Waffles. 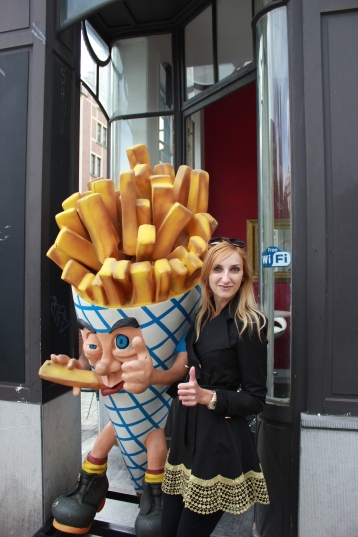 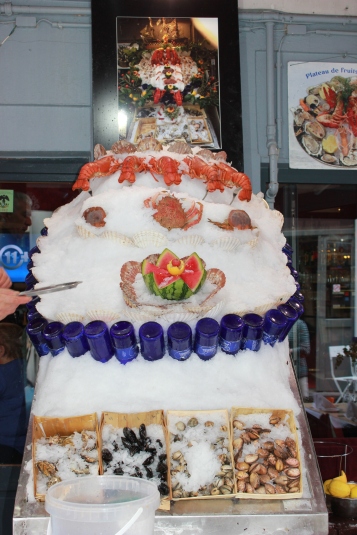 After lunch I am stopping in every souvenir shop that I found on my way, trying to bring a little piece of Brussels home with me. I found this funny naked guy everywhere… a symbol of the city, Manneken Pis statue is depicting a little boy urinating into a fountain. There are several legends behind it but as every legend nobody really knows the truth. In the present though this kid is very famous and he even has his own wardrobe with several hundred different costumes.

Unfortunately I didn’t insist to find the statue, I always want to leave something to be seen for the next time. I never imagined that “next time” i would be locked behind a hotel room. 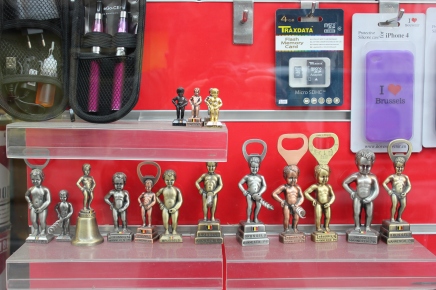 Not far from the city center I found a magnificent building called Mont des arts which is basicaly the Royal museum of the fine arts. Beside that, it offers a full view of the city of Brussels just from the top and a nice colorful garden.

The easiest and faster way to visit the city is by bicycle but even if it says that you never forget how to ride a bike I didn’t want to put my fragile bones in danger again.

Another option is the extravagant cab pulled by horses which is more confortable but also more expensive. 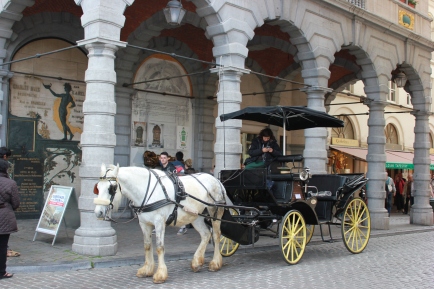 Brussels and Paris don’t share only the tragedy of the last days but also the language spoken by the locals (french) and one of the most famous river of Europe: La Senne. 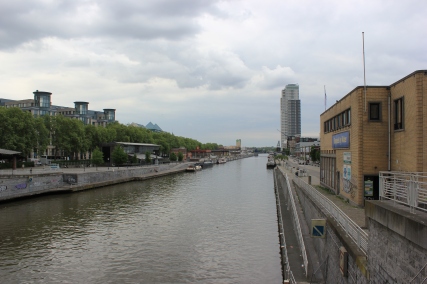 But this city area doesn’t impress by cleanliness and the multitude of beggers asking for money make you keep your bag close to you and wonder if is not safer to take the bus rather than walking along the Senne. To the end of this dirty road though, I entered in another world, a green paradise, an escape from the crowd and agitation of a daily basis life. 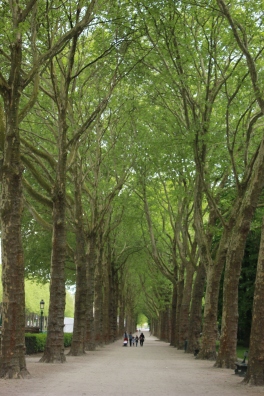 For the first time in my life I felt that I missed the green, as color, as smell in the same time.  After a well deserved break I kept climbing the Koekelberg hill, trying to reach the Basilica of Sacred heart which can be seen even from the hotel. Right then, the huge bells of one of the largest churches in the world were announcing the comencing of the ceremony, inviting the catholics believers for prayer. Tired and with limited time left i decided to go back to the hotel, taking the tram this time, trying to avoid the beggers and the shame of hearing them speaking my language. Yes, most of them are gypsies coming from Romania, throwing our culture and name in dirt and shame everywhere in Europe.

I m ending my journey in the same place where I started it, next by my favourites trees and I promiss to myself that next time I won’t allow any monster to scare me.

We can’t give them the victory of changing the way we live, we can’t let them take away our freedom, our love for life. I will still visit the touristic places wherever in the world, I will watch the football games directly from the stadium and enjoy my food in any restaurant in the world because I am free and nobody can steel that from me.