Medellin and the dark story of Escobar

I am standing in silence in front of his grave, lost in thoughts but not in sadness nor in grief how it would be normal when visiting someone’s eternal resting place. If I could tell him something right now would would it be? I have no idea and only the thought of being so close to him makes me tremble in fear.

The notorious drug lord Pablo Escobar Gaviria found his peace in a humble cemetery located south of Medellin, his beloved city that once used to be his kingdom.

He has been dead for more than 27 years but the dark past is still alive in the memory of Colombian people who cannot understand nor accept the world’s fascination with Pablo. Most of them have lost parents, friends or even children and they wish to be able to burry their sorrow in the same time with him. Instead, the huge numbers of visitors coming for pilgrimage at Pablo’s tomb are a constant reminder of their lost.

Pablo’s grave it’s easy to be found being the most imposing and the most visited from the entire cemetery. People from all around the world are coming and going, Pablo Escobar being the no 1 touristic attraction of the city. In the same cemetery are buried other members of Escobar’s family and even his mentor, Griselda Blanco. Named the “Godmother of the cocaine” or the “Black widow”, Griselda played an important role in Pablo’s life, being the one who opened the U.S borders for the famous kingpin. After that…all it’s history. 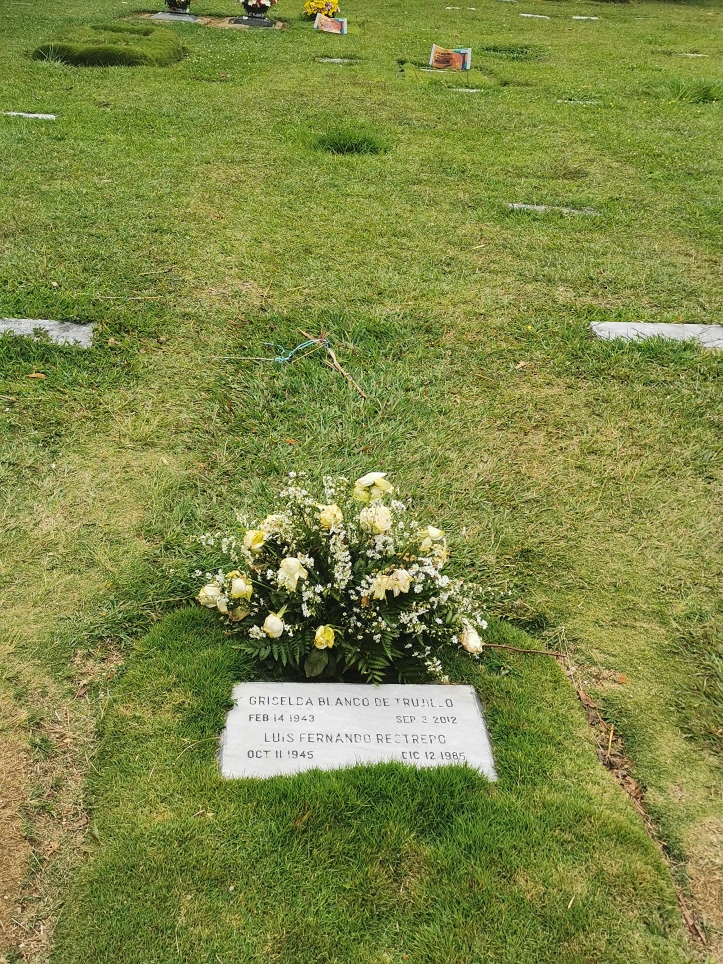 Despite the immense pain felt by the Colombians, many foreign tourists travel to Medellín every year to ease their curiosity regarding Pablo’s lavish lifestyle mostly powered by famous Netflix series like “Narcos” or “El pardon del Mal”. 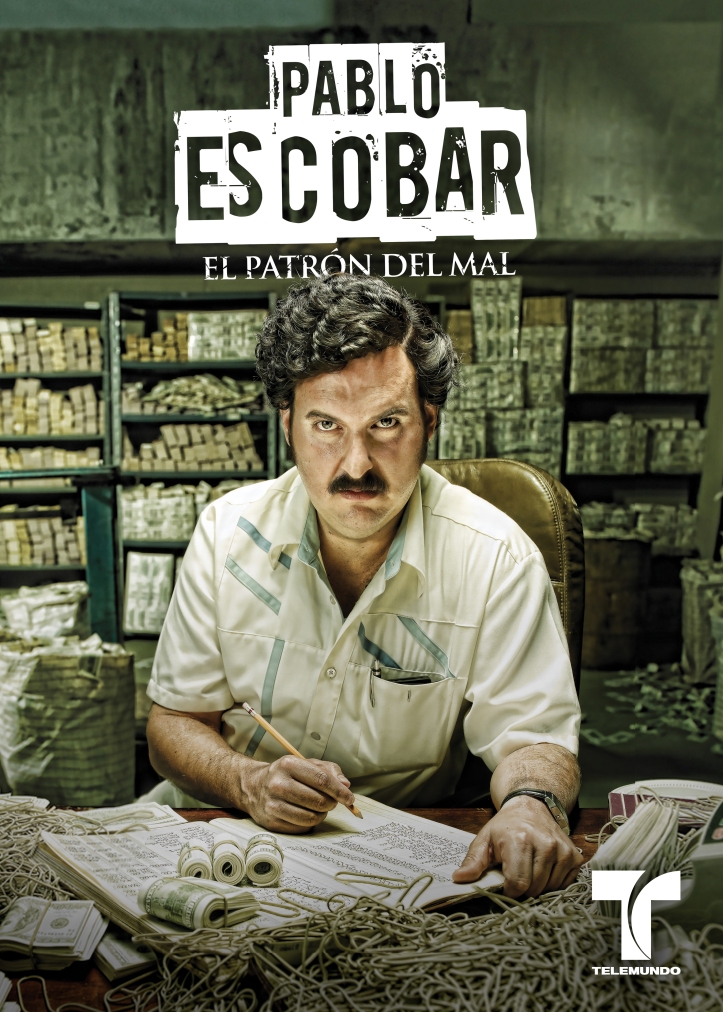 I declare myself one of the series’s fans, spending days and nights in front of the computer, skipping meals or gym classes, nights out or romantic dates, fascinated by the unbelievable story of narcos. There were times when I was truly emphasizing with the bad guys wishing them to escape from police hands or imminent death. It’s the human nature to get attach to the main character regardless if he is good or evil and that’s exactly why Colombian people are feeling hurt by Pablo’s popularity. “He is no hero”, some of them will say, while others will look at you in disgust if you dare to open the subject.

2. The rooftop where he was killed

There are many agencies ready to offer you a full Pablo Escobar tour while in Medellin. When we first arrived in the city we were a little bit skeptical and afraid about our safety (apparently with no justified reason) and we chose to book a tour online (for the first time ever). At the end of the day it proved to be a great choice, Carlos, our tour guide being knowledgeable and presenting us the facts as objective as possible, without criticizing nor glorifying the drug lord actions.

If you are looking for a trustable tour agency in Medellin you can contact City vibes on instagram. They were in charged with my trips in and outside of the city.

The second stop of our “Pablo’s Escobar tour” was the safe house where the famous druglord has been killed. On December 2, 1993, a day after his birthday, the wealthiest criminal in history (with an estimated fortune of $30 billion) attempted to flee using a rooftop of his hideout home in Medellin but has been intercepted and cut down by gun fire. The Colombian troops have been regarded as the heroes who delivered Pablo to justice but many disagree. 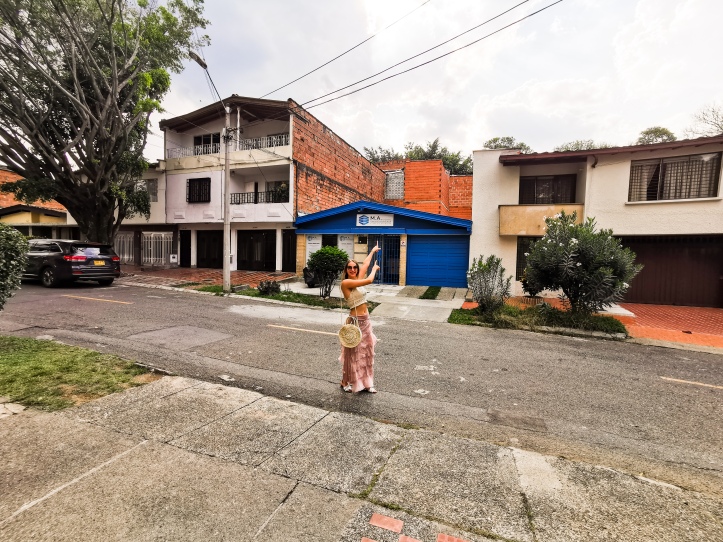 Pablo called his son the night before his death, knowing his end was near. His enemies “Los Pepes” have been joining forces in a group called “Perseguidos por Escobar” where rival drug traffickers, paramilitaries, and other people persecuted by the Medellin cartel boss swore to capture and kill him, while the US and Colombian government needed him alive.

The locals seems to ignore our presence, spending more time inside their homes than outside on the streets, trying to avoid the crowd wandering their quiet neighborhood in search of answers.

Try to keep a low profile as the neighbors are not particularly fond of attention.

The Netflix series “Narcos” used for the death scene another rooftop located two doors away as it looks more authentic, the original rooftop suffering modifications throughout the time. 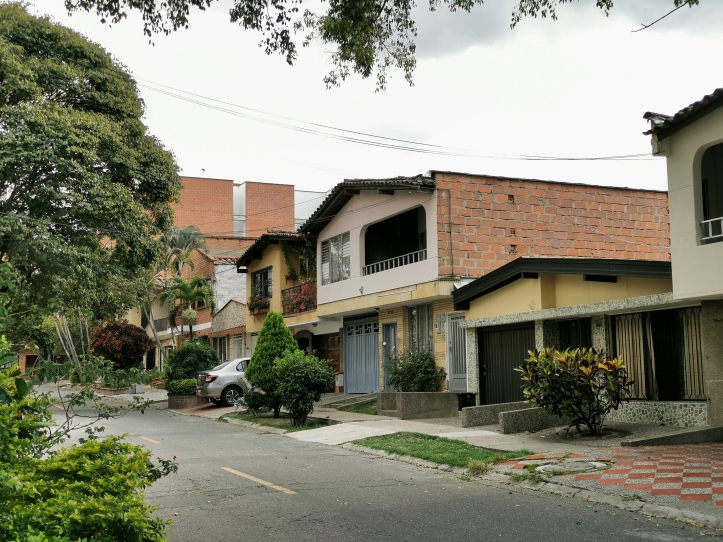 We are driving towards our next stop and I am asking impatiently…”Are we going to see his apartment?”, without knowing that now it’s all powder. 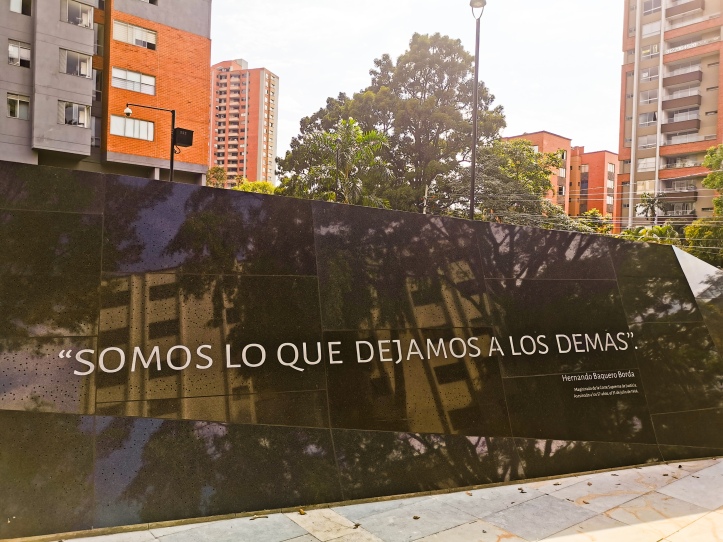 Monaco’s building it’s the place where Pablo’s family used to live in 1980’ before being bombed by his rivals. Where they failed, Colombian government succeed, brining down the building years later in 2019 (few months before my visit) using Pablo’s favorite weapon, the dynamite.

“That building falls, the hope begins” stated the country’s president in an attempt of sweeping not only a sick tourist spot but also a painful memory of the past. A memorial parks has been built on the same place, honoring the innocents that felt victims of his crimes. It’s easy to recognize their names on the marbles stones, most of them being public figures such as journalists and important politicians of that time. A black board with thousands holes stands proof of the thousands lives brought down by the cartel.

Undoubtedly the city has made a miraculous recovery after decades of bloodshed, now being one of the safest and most beautiful places in Latin America. “The city of eternal spring” or “A city in a park” who I like to call it, Medellin it’s a truly wonder and one of the coolest city I have ever visited.

When Pablo Escobar agreed to a sentence in Colombia he did it on his terms, choosing a perfect spot to built his own prison, a luxurious hotel more than a lockout, which featured a jacuzzi, a club, a pool with a waterfalls and even a football field and a helicopter for transporting goods from the city. From here Escobar conducted his business as per normal having the state’s protection against his enemies who were multiplying day after day.

The prison it’s a real fortress conveniently situated on top of a hill, which was giving Escobar enough time to clear out the rooms of unauthorized guests before any checks being conducted. 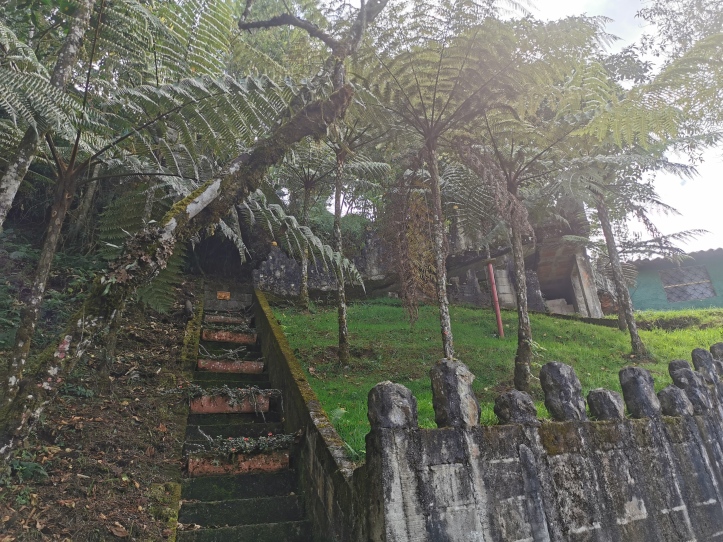 When the authorities decided that it’s time to end the charade, Escobar escaped the prison and was capture and killed only one year later.

Nowadays the property was loaned to a group of monks who restrict the area for tourism, reason why we weren’t allowed inside of any facility. Some of them even claims that Pablo’s ghost is haunting the place at late night hours.

5. The Robin Hood of the neighborhood

Surprisingly the opinions are divided when it comes to Pablo. While most of the Colombians regard him as a cruel terrorist, a minority of people consider him a generous philanthropist who took from the rich and gave to the poor. His humble beginnings made him won the affection of his neighbors and in return Pablo built for them “el barrio” (the neighborhood) named after him and even a football field.

His son also remembers Pablo as a loving father who offered him everything that a child could dream but in the same time believes that Pablo the drug lord was far more brutal than many try to picture him.