Dream and nightmare in Santorini

Our ferry its about to make its final stop in Thira, Santorini and hundred passengers are waiting inpatient to reach the main port of the beautiful island. The crowed stacked in pairs and holding hands in front of the huge iron gate takes me back in the past to the Noah’s legend and his ark where million species saved from the devastating fload are brought safe to the shore. Among them its also us, the happy survivors of 3 days in Mykonos, the island where the party never stops.

Oia the pearl of Santorini

The road to Oia is quite long and we are trying to kill the time “admiring” the view out of the bus window: narrow streets, arid earth and fragil enviroment…nothing of the beauty displayed on the pages of touristic magazines. I can read a trace of disappointment on Abdulla’s face and even if my heart is shrouded in fear I am trying to raise his morale “come on babe its gonna be alright”. 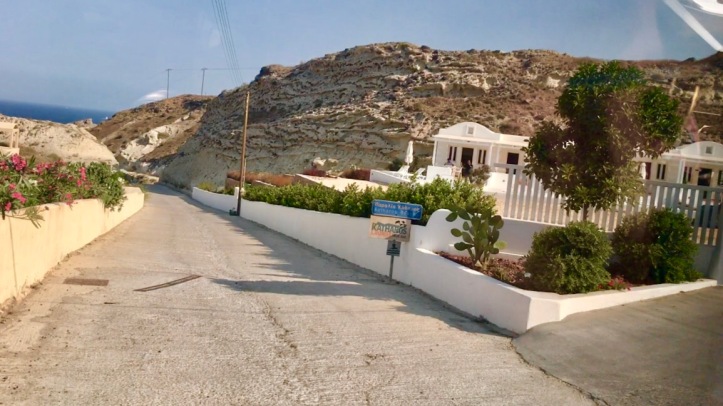 After more than one hour, the driver stops us in front of a white pedestrian street pointing in the direction of our hotel “Kima villas suite”. I cant see it just yet being stolen by the beautiful scenery of white and blue constructions “carved” meticulously above the sea. 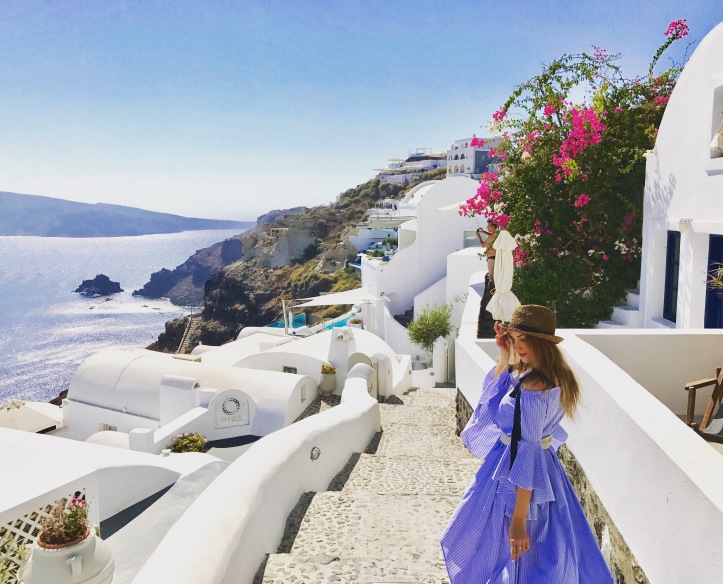 Hypnotized by the divine canvas depicted in shades azure, levitating on the stairs below me, I am woken up by a stranger voice…”Kalimera (good morning!), welcome to Santorini”.

A bottle of chilled champagne and fresh grapes placed in front of our door are responsible for our good mood and the tiredness is immediately replaced by a state of excitement, having no doubt that we are going to enjoy our short stay.

The hotel location is so perfect that we could have spend the rest of the day stucked in bed or relaxing in the tiny pool, dreaming about the lost Atlantis or mythological stories meant to describe the mysterious charm of the volcanic paradise.

The legend of the lost Atlantis

While nowadays geologists studies confirmes that Santorini is the result of a natural volcanic eruption, the ancient Greeks used to give a more meaningful explanation for a phenomen inexplicable to humans at that time. According to them, Santorini was created out of a miracle when Euphemus (son of Poseidon) coming back from an expedition by the sea, dreamed of making love to a nymph, the daughter of Triton (the sea God). The nymph got pregnant and advised Euphmus that throwing a clod of earth in the open sea would create a safe place for giving birth, far away from her infuriated father. The island was named Calliste meaning “the most beautiful” while their son was named Theras (from where the place got its name later on as Thera).

The island gained even more popularity after being related to the most mysterious and well known myth, the lost Atlantis. Atlantis was first mentioned in a book by the greek philosopher, Plato, being said that God punished the Atlantians for their arrogance, vanishing their island in one night leaving behind only masses of mud.

The best sunset in the world

Another story claims that Santorini has the best sunset in the world and determined to find its veracity we join the hundred other curious tourists spread all around the cliffs, waiting for the perfect shot. The inevitable happens and I lose Abdulla in the crowed, too focused on chasing the orange sun which is about to settle behind the volcanic rocks.

After a long search I return to the hotel alone, asking the receptionist for a second key, admitting with shame to have lost my boyfriend in what was supose to be a romantic evening. Abdulla is relieved to find me safe in the hotel room and we celebrate our encounter with a late dinner and a bottle of greek wine.

Food in Greece didn’t impress me much and after trying a large variety of local food in the authentic tavernas, I got stuck with the same choice every day: greek salad and grilled fish, always shared with the fluffy guests around the table. 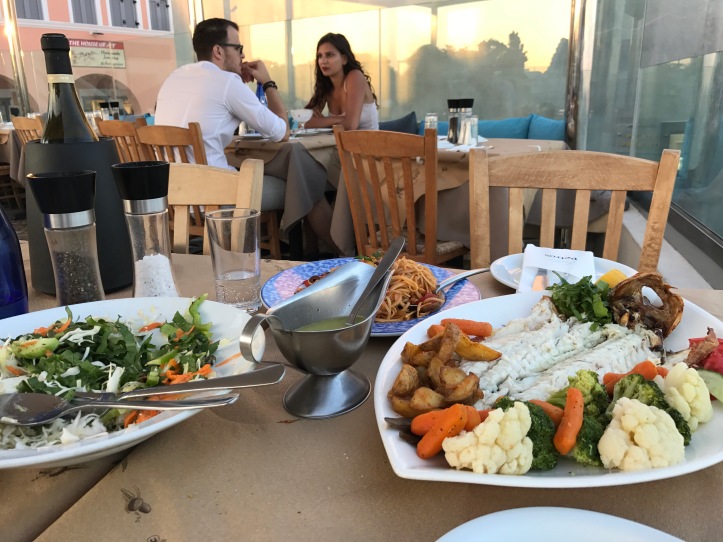 Next day in the morning we are supposed to go on a boat trip around the island but our plans are canceled when Abdulla experience severe stomach ache.

Georgia, the hotel receptionist is preparing a delicious breakfast for us and even if my baby is scared to touch any food, he cant say “no” to the delicious home made croissants and muffins. Every morning, Georgia is baking different cookies and breads and sets up the outside table for a memorable culinary experience with a paradisiac view.

In great pain and with no energy, my baby doesn’t want to ruin our stay in one of the most beautiful places in the world being ready to endure the heat from outside to accomplish my wish: the famous donkey ride on the Santorini hills.

We stop time to time on the way, admiring the surroundings and trying to immortalize the ireal beauty on our photo camera. White buildings with blue cupolas and tiny windows are attached together on the vulcanic hills as giant pieces of a colorful puzzle. 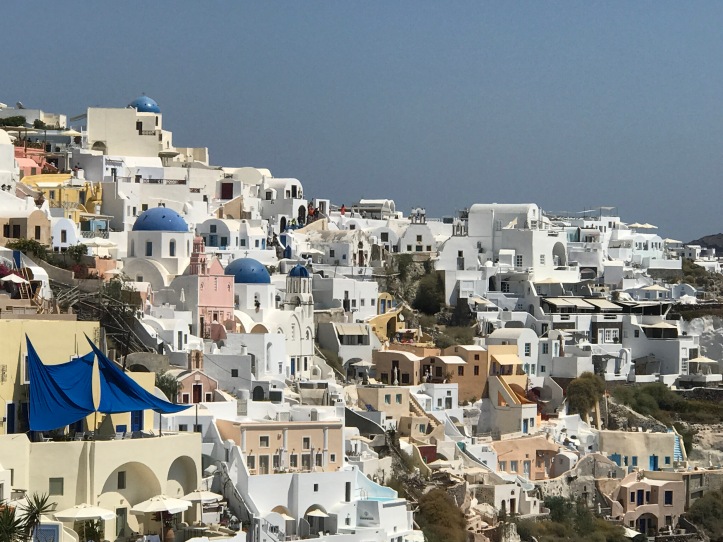 Santorini is one of the most picturesque place in the world, reason why countless brides and grooms are climbing the white roofs everyday in search of a perfect wedding picture.

This is definitely the perfect place for honeymooners or couples in general and visiting the beautiful island alone or with a group of friends might be quite depressing.

Another legend says that couples who visit Santorni will either get married or will break up… the volcano fault probably which is responsible with the level of energy and emotions.

While weddings in Santorini might be something common, the ballet is definitely not. A beautiful balerina moving her body in the elegant rythm of the ballet dance is catching the eyes of the tourists who stops for a moment to admire the two greatest creations: women and nature.

We take a last refreshment break, in a terrace located above the mesmerizing blue sea. I must admit that I never loved mathematics but the Alpha seems to be my new favorite “equation” while in Greece. 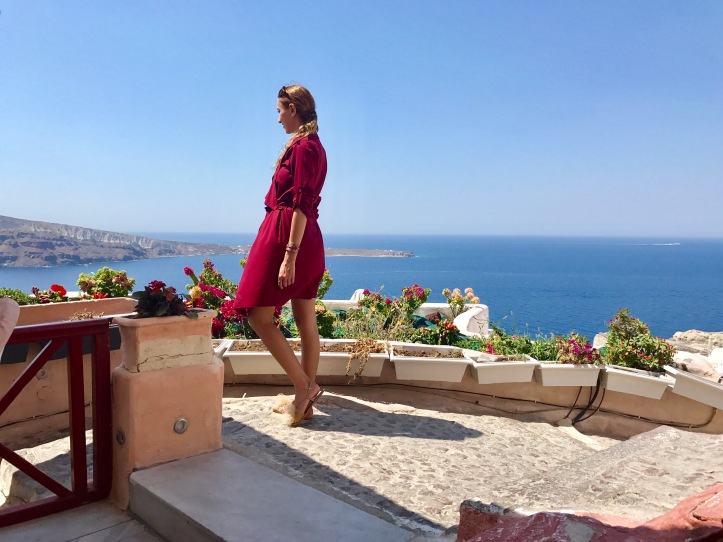 Riding a donkey on Santorini hills

The donkeys are close by (I can say by the smell) and we are descending the stairs careful not to step in their poo which is spread careless everywhere.

Not surprisingly the price for the ride is fixed like everywhere in Europe (5 euro) and we don’t need to worry about being ripped off or having to bargain to obtain a decent price. However, I am about to regret the ride even before starting it when I realize that the poor animals are doing a huge effort carrying on their back silly tourists (like us). The caretaker is right behind, slapping the animals whenever they are stopping in order to regain their breath. I shout at him, forbidding to touch my donkey “dont even try”. 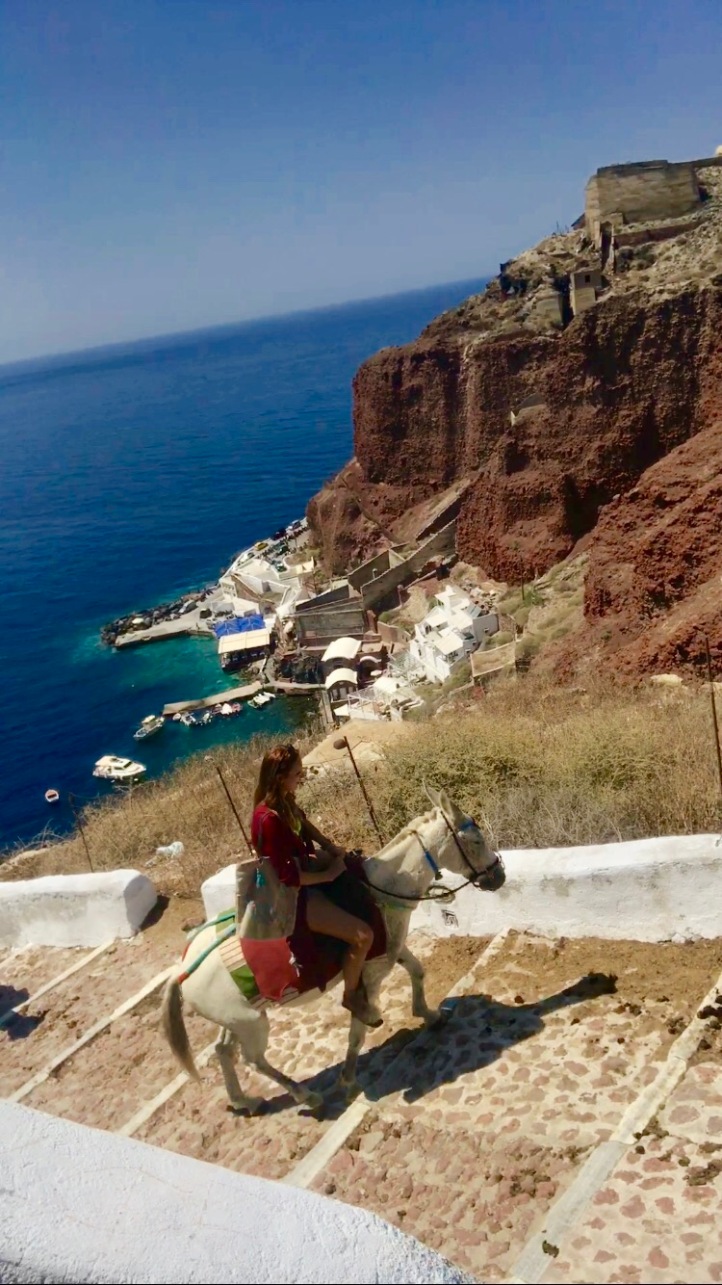 I am saying goodbye to my beautiful friend after a tough ride ready to go back to the hotel but not before of discovering more misteries well hidden on the tiny streets of Oia.

Although Santorini is a rather small island it is overrun with religious monuments such as chapels, churches and monasteries depicted in white and blue. The two colors seems to have a highly importance for the greeks representing not only the national flag but also the sky and purity associated with the christianity.

Like everything in Greece, the myths and stories behind the two colors are countless but the more realistic explanation is that being built by using dark, volcanic stones the heat was unbearable and whitewashing was the perfect solution to keep the inside cool while the blue was cheap and available everywhere (a common agent used for washing clothes that most household will have in hand). The government found the idea quite patriotic and mandated that all buildings must be painted in white and blue if they weren’t already.

Sailing around the volcano

We decided to extend our stay in Santorini with one more day, time allocated to discover the hidden beauty of the volcano and its unique beaches by boat.

First stop, the hot springs interesting when watched from the comfort of the boat, far away from the shallow waters with dangerous levels of sulf and rocky bottom. The currents are quite high as well making the swimming almost impossible while the sulf is leaving a permanent mark on your favorite bath suite. 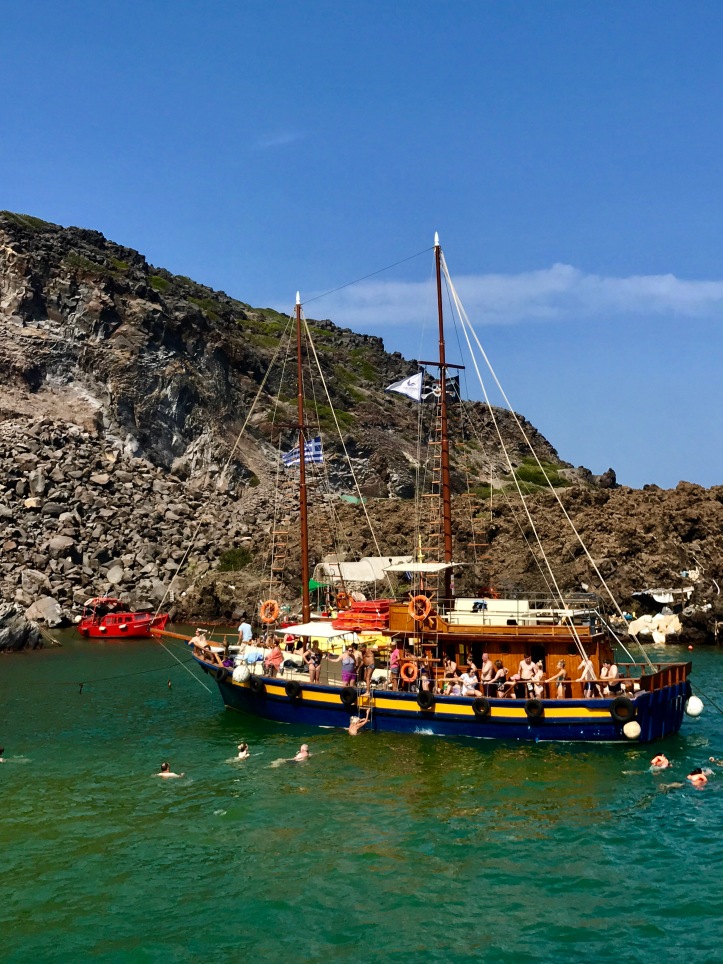 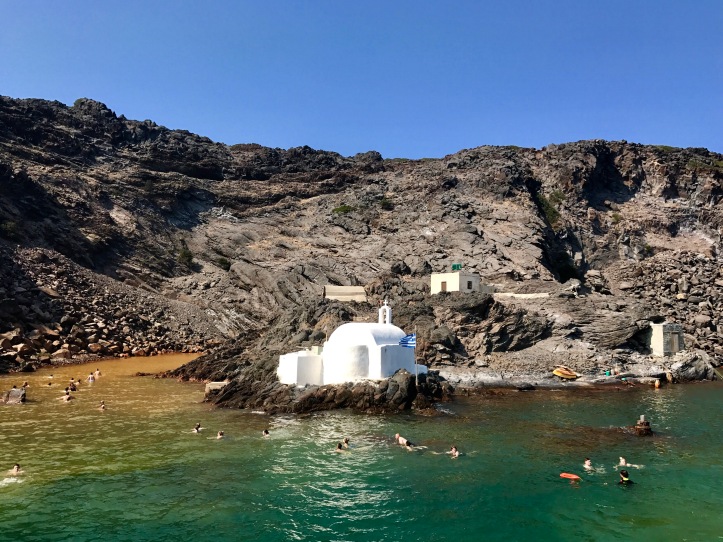 The boat stops in few more location, including the white and red beach, where I decide to refresh myself jumping in the cold waters while the lunch is being prepared by the crew. The two beaches are relatively close to each other and both of them can be easly described as original and spectacular. The volcanic lava red rocks, pebbles and red sand that surround crystal clear waters, create an amazing scenery that you won’t find anywhere in the world. 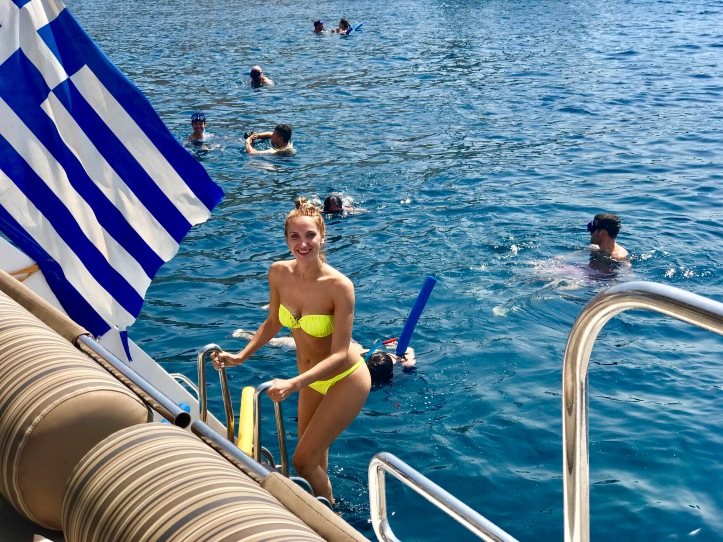 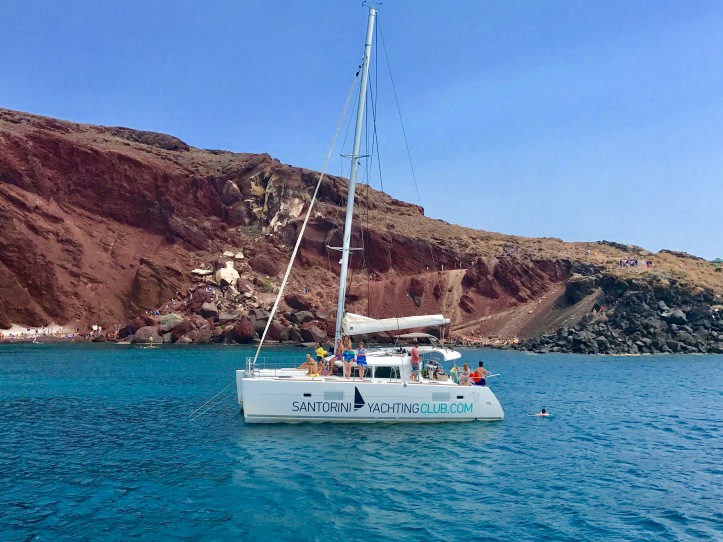 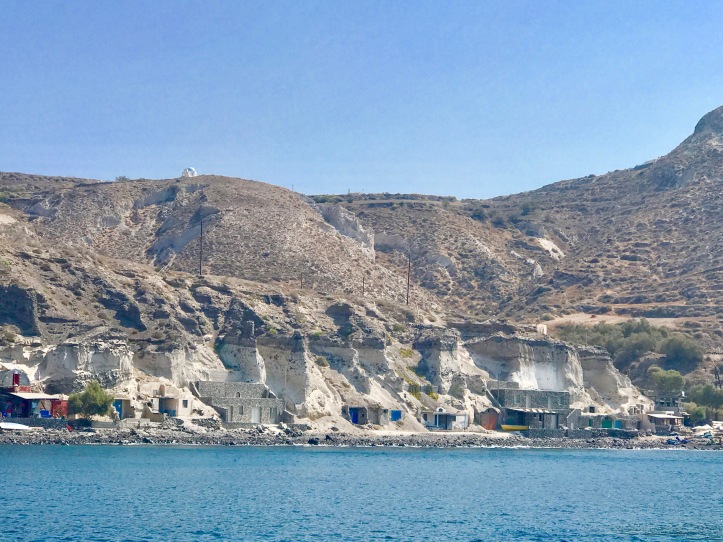 Right after the lunch i start feeling dizzy and sleepy and my health is visible damaged once I reach the hotel and I am not being able to walk without my baby’s support. The beautiful dream si replaced by the nightmare of a cruel food poisoning which keeps us awake the whole night and drain the last drop of energy from my body. Dehydrated and more dead than alive I manage to board two different aircrafts and continue my convalescence under the safe roof of my home. Now I keep wondering either we didn’t like the greek food or the greek food didn’t like us, eighter way I don’t think I am going to search for the answer too soon.